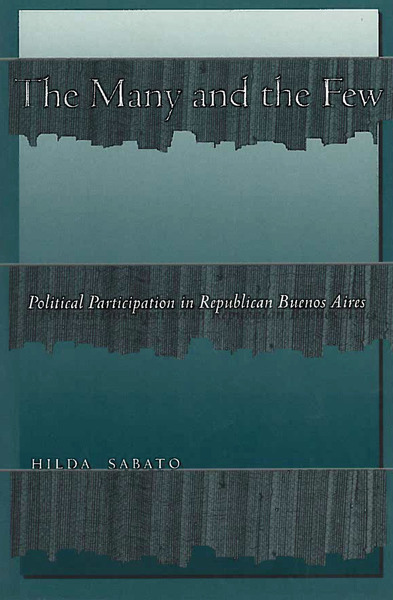 This book analyzes the relationship between the many and the few in the formation of a republican polity. It studies the case of Buenos Aires in the 1860s and 1870s, when the inauguration of a new national order in Argentina entailed a radical change in the ways of power. By exploring the different forms of participation of the people in the public life of the city, it illuminates a frequently neglected side of the process of construction and legitimization of political power in nineteenth-century Latin American societies. It also provides new historical evidence on the origins of democracy in Argentina, and proposes an interpretation of that process that challenges prevailing views.

The book focuses on two major topics: the history of elections and electoral practices, and the creation and development of a public sphere. Its detailed, and often colorful, description of electoral procedures portrays a dynamic and competitive political life that contradicts traditional interpretations of the history of citizenship in Argentina. The author also argues that elections were not the only major element in the relationship between the many and the few, that these decades witnessed the formation of a public sphere: a space of mediation between civil society and the political realm, where different groups voiced their opinions and directly represented their claims. She studies three aspects of the life of the city that were symptoms of this process: the proliferation of associations, the expansion of the periodical press, and the development of a “culture of mobilization.” The book concludes by assessing how its conclusions offer new clues to the study of the Argentine political system, the history of Latin American democracies, and, more generally, the relations between the many and the few in modern societies.

Hilda Sabato is Professor of History at the University of Buenos Aires. Among her works is Agrarian Capitalism and the World Market: Buenos Aires in the Pastoral Age, 1840-1890.

"Sabato offers a unique view of the relationship between the political elite and the public in the mid-19th century Buenos Aires, Argentina. . . . Recommended for upper-division undergraduates and above."

"Centered entirely in Buenos Aires, the book provides an excellent account of public life. . . . I highly recommend the book to specialists on Argentine politics and on nineteenth-century Latin America."