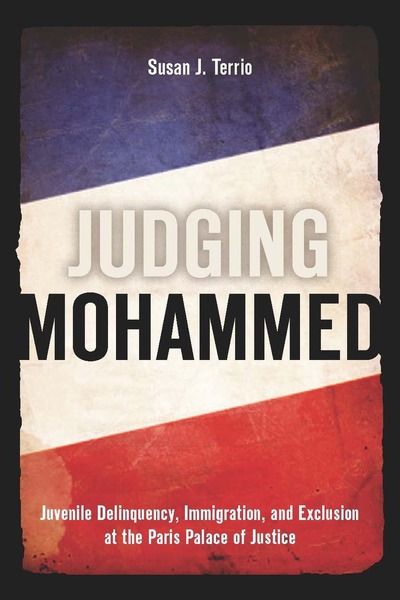 In October 2005, three weeks of rioting erupted in France following the accidental deaths of two French boys of North African ancestry. Killed while fleeing the police, these boys were deemed dangerous based largely on their immigrant origins. In France, disadvantaged children of immigrant and foreign ancestry represent the vast majority of formal suspects and have increasingly been portrayed as a threat to public safety and as the embodiment of the assault on French values.

Despite official rhetoric of protection, Judging Mohammed reveals how the treatment of these children in the juvenile courts system undermines legal guarantees of equality and due process and reinforces existing hierarchies. Based on five years of extensive research in the largest and most influential juvenile court in France, this work follows young people inside the system, from arrest to court trials. Revealing an alarming turn toward accountability, restitution, and retribution, this groundbreaking study uncovers the disquieting reasons behind France's shifting approaches to the identification, treatment, and representation of its delinquent youth.

Susan Terrio is Associate Professor and Chair of the Department of Anthropology at Georgetown University. She is the author of Crafting the Culture and History of French Chocolate (2000).

"This in-depth study will help those who wish to understand more completely the French juvenile justice system and how it differs from its American counterpart . . . For those interested in youth violence, urban and banlieue riots, and the children of immigrant and migrant populations in France today, Judging Mohammed will shed light on how the youth of these minority populations are treated and, more accurately, judged in the Palace of Justice's juvenile court."

"[Judging Mohammed is] a well-researched and deeply instructive account of the processes of investigation, prosecution, and decision-making in cases brought against youths . . . Terrio's book is an important contribution not only to the literature on juvenile justice systems, but also to the literature on the challenges faced by nation-states such as France whose core values and principles imperfectly meet the changing needs of its citizens."

"How a key institution struggles against vast social changes, most of which are out of its control, but for which its responsibility is widely accpeted, is the question anthropologist Terrio tackles in her excellent book."

"The international notice garnered by the 2005 suburban riots drew to attention the deep racial tensions in France and simultaneously provides a useful frame for Susan Terrio's project of understanding juvenile courts as a site of conflict between the dominant social order—particularly the ideological and cultural biases of 'French identity'—and the racial, religious, and ethnic diversity of contemporary France . . . Judging Mohammed's exploratory, anthropological study of Parisian juvenile courts offers readers an insightful journey through the juvenile justice system, with particular interest for those interested in comparative judicial studies or race relations in France."

"This compelling, clear account speaks directly from the French case to current debates about how far we wish to penalize juvenile behavior, and does so based on first-hand study of judges and courts in France. Terrio's book sets a new standard for analytically sharp and ethnographically rich studies of judging in European societies."

"Judging Muhammad illuminates new ways of understanding youth. The book reveals the enormous impact changes in contemporary French society are having on the lives of young people and their families."

"Terrio's honest look at juvenile delinquency in France appears at an exceptionally important moment, both in France and globally. Judging Muhammad illustrates how a form of cultural racism has been incorporated into the French courtroom, penalizing the most marginal citizens. It is an excellent, timely, and insightful work."