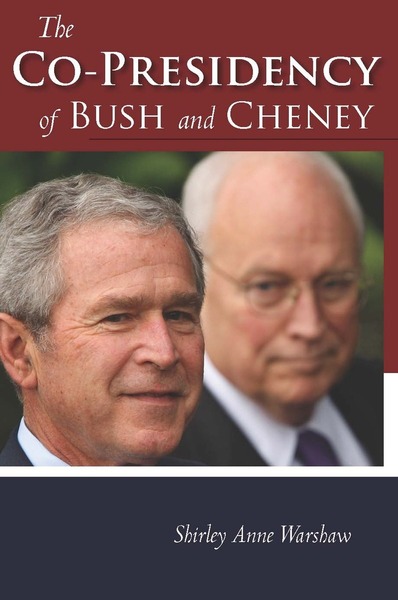 The Co-Presidency of Bush and Cheney
Shirley Anne Warshaw

The Bush administration is out but the American public continues to suffer from its disastrous domestic and foreign policies. In this excellently documented work, presidential scholar Shirley Anne Warshaw offers an in-depth analysis and exploration of the political maneuvering that got us into our current mess. Combining her study of the motivations of both Dick Cheney and George W. Bush, knowledge of the spheres in which they operated, and personal interviews with White House staff and Washington insiders, Warshaw demonstrates that these complementary conservatives were nothing less than co-presidents. Breaking with popular sentiment, she denies that Bush's authority was hijacked or stolen. Bush, rather, focused on building what he called a moral and civil society, anchored by a war on science and by the proliferation of faith-based programs, while allowing Cheney to lead in business and foreign policy. Warshaw highlights Cheney's decades-long career in Washington and his familiarity with its inner workings to present a complete picture of this calculating political powerhouse who continues to capture headlines. From Cheney's unprecedented merging of the vice president's office into the president's to his abhorrence of what he deemed congressional interference in the president's ability to do his job, Warshaw paints an intriguing, and at times frightening, portrait.

Shirley Anne Warshaw is Professor of Political Science at Gettysburg College. An authority on the American presidency, the president's Cabinet, and organizational decision structures for presidential policymaking, Warshaw is the author of numerous books and is a frequent commentator on National Public Radio and network radio and television.

"The author successfully argues that Cheney did not usurp the power of the presidency but rather reached an accommodation with Bush on a division of labor and responsibility with the executive office ... The work contains extensive notes and documentation. It is a must read for presidential scholars and all others trying to understand the Bush-Cheney relationship."

"Shirley Anne Warshaw's masterful analysis demonstrates how George W. Bush ceded the most significant presidential powers to Dick Cheney. Warshaw's book provides strong evidence that Cheney was able to grab the levers of power that Bush had so casually yielded. The lesson is a stark one; the combination of a weak president, and a vice president who captured that power, took the country in dangerous directions the voters neither envisioned nor chose."

"The Co-Presidency of Bush and Cheney chronicles Vice President Cheney's unprecedented role in helping to shape White House policy on energy, Iraq, assertions of presidential prerogative, and more. Shirley Anne Warshaw details and assesses the actions of the Bush administration—a provocative and valuable start in exploring the lessons that future presidents may take from the past eight years."

"In my view—an insider's view—Dr. Warshaw is too kind. Dick Cheney was not copresident, he was president. In all matters of great importance, that's the way he wanted it, that's the way it was. Dr. Warshaw's book brilliantly illuminates Cheney's shadow presidency, and for that reason alone should be read by everyone who cares about the fate of our Republic."

—Lawrence Wilkerson, Former Chief of Staff to Secretary of State Colin Powell, and Visiting Harriman Professor of Government and Public Policy at the College of William and Mary

"Warshaw lays out with commendable academic diligence the division of power in the Bush White House and how a new, untested president, surrounded by political aides, willingly ceded all the heavy lifting to his vice president. Dick Cheney commandeered economic, energy, environmental and national security while George W. Bush kept busy with his faith-based agenda. The irony is that Bush succeeded with his small share of the copresidency while Cheney became a human wrecking ball, taking Bush down with him, yet leaving a legacy of broadened executive power for future presidents."

"Warshaw has produced an astonishing portrayal of the Cheney phenomenon—a unique episode in American national governance. This work is a powerful indictment of wrongful vice presidential over-reaching. Years from now, however, Cheney's actions may be cited as evidence of bold statecraft in a time of great crisis. The Devil and Daniel Webster are both at work in these pages."

"A fascinating analytical work on the most powerful vice president in our history, how he built that power with a willing president, and the unwanted consequences that ensued."

—David M. Abshire, Co-Founder and Vice Chairman, Center for Strategic and International Studies, and President, Center for the Study of the Presidency

"An absorbing account of the relationship between George W. Bush and Dick Cheney. This is a must-read for people who care about governance and our constitutional system."

"Thoroughly researched and insightful into the complexities of both personalities, the book offers an engaging look at the most controversial presidency since Nixon's." 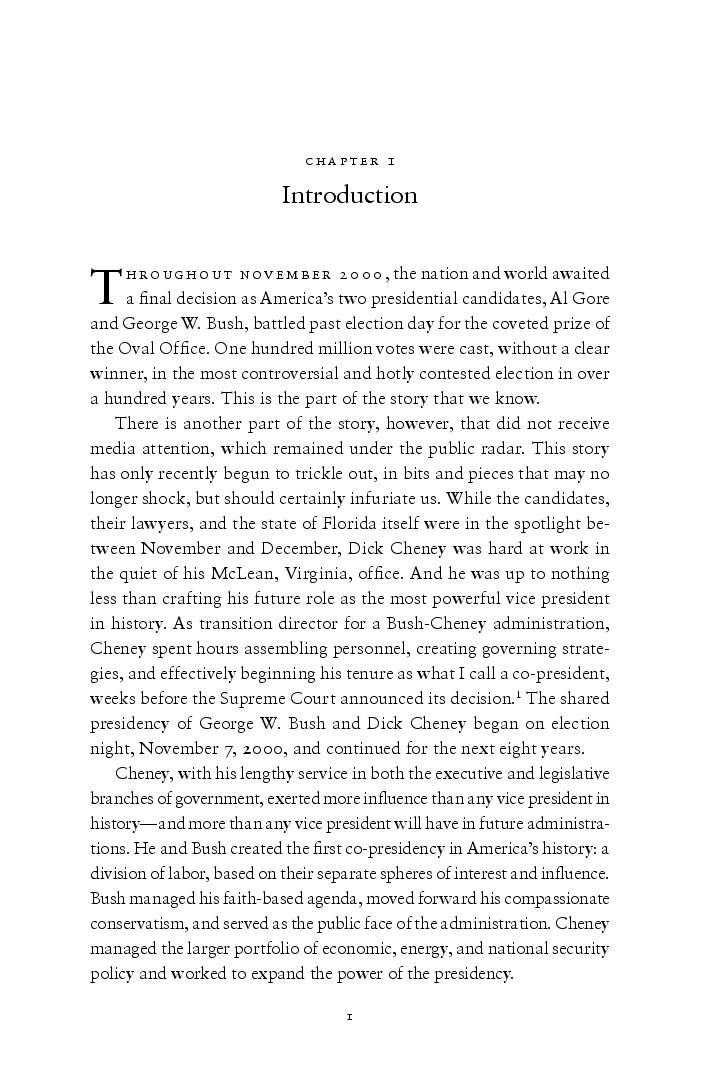 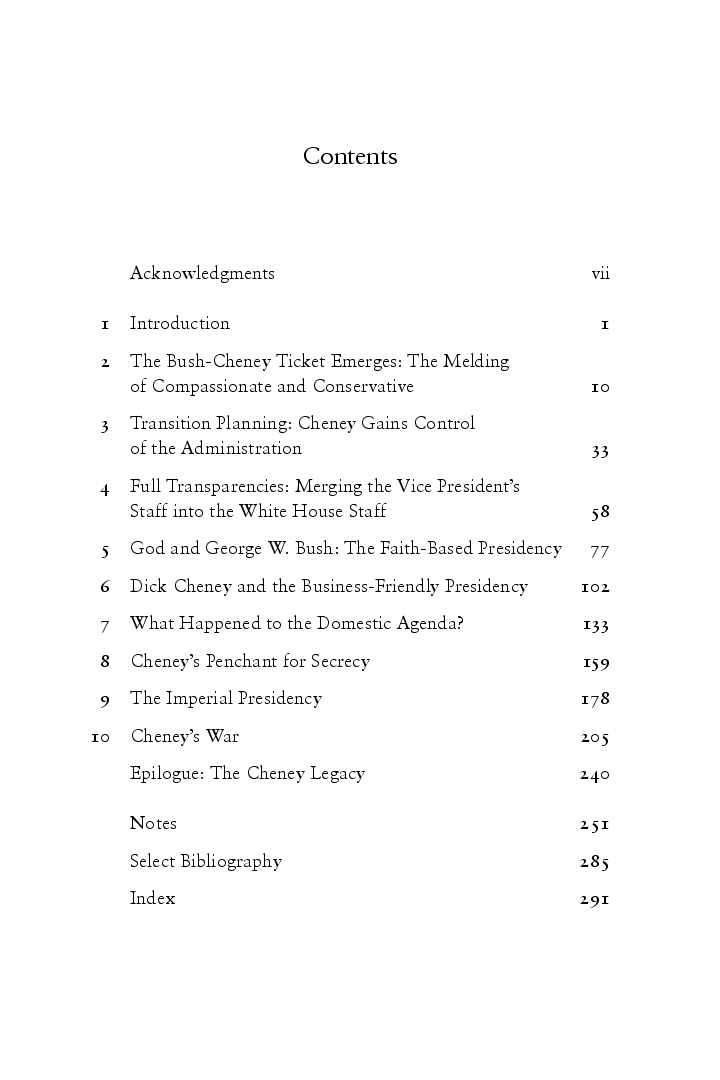