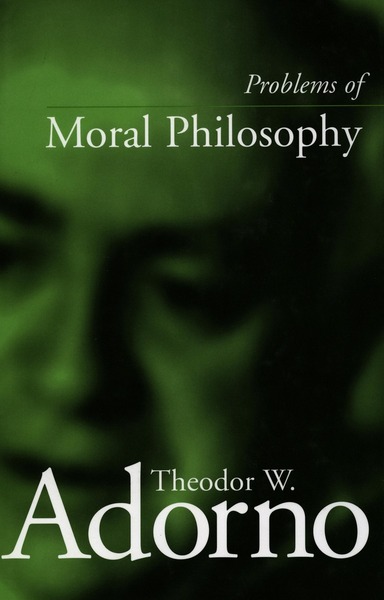 Theodor W. Adorno (1903-1969), one of the leading social thinkers of the twentieth century, long concerned himself with the problems of moral philosophy, or "whether the good life is a genuine possibility in the present."

This book consists of a course of seventeen lectures given in May-July 1963. Captured by tape recorder (which Adorno called "the fingerprint of the living mind"), these lectures present a somewhat different, and more accessible, Adorno from the one who composed the faultlessly articulated and almost forbiddingly perfect prose of the works published in his lifetime. Here we can follow Adorno's thought in the process of formation (he spoke from brief notes), endowed with the spontaneity and energy of the spoken word.

The lectures focus largely on Kant, "a thinker in whose work the question of morality is most sharply contrasted with other spheres of existence." After discussing a number of the Kantian categories of moral philosophy, Adorno considers other, seemingly more immediate general problems, such as the nature of moral norms, the good life, and the relation of relativism and nihilism.

In the course of the lectures, Adorno addresses a wide range of topics, including: theory and practice, ethics as bad conscience, the repressive character, the problem of freedom, dialectics in Kant and Hegel, the nature of reason, the moral law as a given, psychoanalysis, the element of the Absurd, freedom and law, the Protestant tradition of morality, Hamlet, self-determination, phenomenology, the concept of the will, the idea of humanity, The Wild Duck, and Nietzsche's critique of morality.

Theodor W. Adorno was one of the founders of the Frankfurt School of Critical Theory, and one of the most influential thinkers of the twentieth century in the areas of social theory, philosophy, literary criticism, and aesthetics.

"What makes Problems of Moral Philosophy doubly remarkable is the simplicity of the original German and the clarity of the translation. This volume . . . is incredibly valuable for those seeking a clear introduction to Adorno's formidable complex thought."