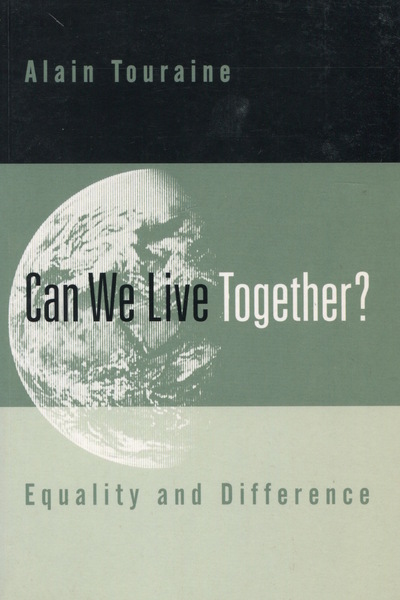 Can We Live Together?
Equality and Difference
Alain Touraine Translated by David Macey

In this book, a leading French social thinker grapples with the gap between the tendency toward globalization of economic relations and mass culture and the increasingly sectarian nature of our social identities as members of ethnic, religious, or national groups. Though at first glance, it might seem as if the answer to the question “Can we live together?” is that we already do live together—watching the same television programs, buying the same clothes, and even using the same language to communicate from one country to another—the author argues that in important ways, we are farther than ever from belonging to the same society or the same culture.

Our small societies are not gradually merging into one vast global society; instead, the simultaneously political, territorial, and cultural entities that we once called societies or countries are breaking up before our eyes in the wake of ethnic, political, and religious conflict. The result is that we live together only to the extent that we make the same gestures and use the same objects—we do not communicate with one another in a meaningful way or govern ourselves together.

What power can now reconcile a transnational economy with the disturbing reality of introverted communities? The author argues against the idea that all we can do is agree on some social rules of mutual tolerance and respect for personal freedom, and forgo the attempt to forge deeper bonds. He argues instead that we can use a focus on the personal life-project—the construction of an active self or “subject”—ultimately to form meaningful social and political institutions.

Alain Touraine is Professor of Sociology at the Ecole des Hautes Etudes en Sciences Sociales, Paris. His many previous books include What Is Democracy? and Critique of Modernity.

“Touraine's thorough mastery of modern social theory, politics, and history provides a richness and depth to the book lacking in much discussion of globalization and modernity. He is obviously a world-class thinker.”—Douglas Kellner, University of California, Los Angeles