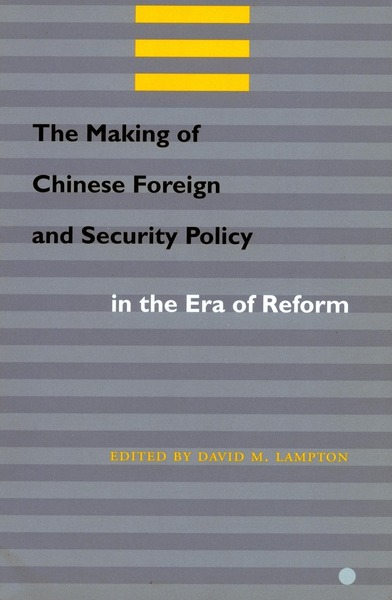 The Making of Chinese Foreign and Security Policy in the Era of Reform
Edited by David M. Lampton

This volume provides a unique look at the changes in the way Chinese foreign and security policy is made during the reform era, and the implications of those changes for China’s future behavior on the international stage. Bringing together the contributions of more than a dozen scholars who undertook extensive field research in the People’s Republic of China, South Korea, and Taiwan, the book is the most comprehensive, in-depth, and rigorous account of how Chinese foreign and security policy is formulated and implemented.

Since the reform era began in the late 1970s, a new and ever-changing mix of forces has been reshaping Chinese foreign and national security policy-making institutions and processes. This volume examines those forces: bureaucratic politics and evolving organizations, changing elite views and skills, an altered domestic agenda, increasingly diverse social forces and public opinion, and the growing complexity of the international system itself, including globalization and multilateral regimes. The analysis goes one step further to look at specific foreign and security policy issues and relationships, including case studies dealing with Korea, Taiwan, the World Trade Organization, and arms control.

The volume addresses itself to policy-makers in both the public and private sectors, as well as scholars of China and international relations. It concludes that China’s foreign and national security policy making, as well as its behavior abroad, is largely shaped by the forces of globalization, decentralization, pluralization, and professionalization. But the book also shows how the enduring power of Chinese decision makers and their national interest focus also mould China’s behavior, notably in crises and in major strategic decisions. Looking to the future, the book suggests that the forces of change in the Chinese system offer the possibility, though not the certainty, that China may increasingly fit more comfortably into the international system in the years ahead, though not without frictions and mishaps.

David M. Lampton is George and Sadie Hyman Professor and Director of the China Studies Program at the Johns Hopkins School of Advanced International Studies, and Director of Chinese Studies at The Nixon Center, Washington, D.C. His most recent book is Same Bed, Different Dreams: Managing United States-China Relations, 1989-2000.

" . . . [The] quality of the contributors and the editor's choice of essay topics make for a sophisticated volume for undergraduate and graduate students and some professional policy analysts."

"This is a substantive contribution to the literature on Chinese foreign policy. . . . The volume is by far the best and most comprehensive study currently available on the ways in which the processes of foreign policy-making have been transformed in China during the reform period. It explains better than any previous work the complexities of the impact of economic interdependence on foreign relations. It exhibits all the strengths and few of the weaknesses of approaches to foreign policy that place most stress on decision-making processes. It deserves careful reading by students and practitioners alike."

"The best book to date on how Chinese foreign and security policy is made. . . . This is an informative and useful book. Lampton's introductory chapter could fruitfully be read by anyone interested in contemporary international relations or foreign policy making. . . . The book as a whole will be required reading for specialists in the field of contemporary China and international relations in Asia."

"This 12-chapter compendium is the culmination of years of fruitful work by a number of the best specialists in the field of Chinese foreign and security policy. . . . The result is a volume of great use to scholars and practitioners alike. . . . [Lampton's] introductory chapter is exemplary, well written and well organized, giving a clear sense of how the subsequent chapters fit into the broad purpose and scope of the book. He also provides perspective analytical frameworks for judging the overall importance of recent trends in Chinese foreign and security policymaking."

"The book is noteworthy in that all of the analysts are experts in their respective fields and their contributions reflect their professionalism and expertise. In other words, there isn't a dud in the book."

"An accessible and authoritative study. . . . a path-breaking study of China's foreign and security policy."

"This book will become the key text for understanding the mechanisms of Chinese external policy for the foreseeable future."

"Skillfully edited, this informative volume is a systematic account of China's foreign and security policy-making in the era of reform. Containing a collection of well-researched contributions that cover the major aspects of Chinese foreign policy-making process, the book provides a very comprehensive, in-depth and insightful analysis of the changes in China's foreign and security policy-making from 1978 through 2000 . . . .this is an important and timely book, of both practical and theoretical significance."