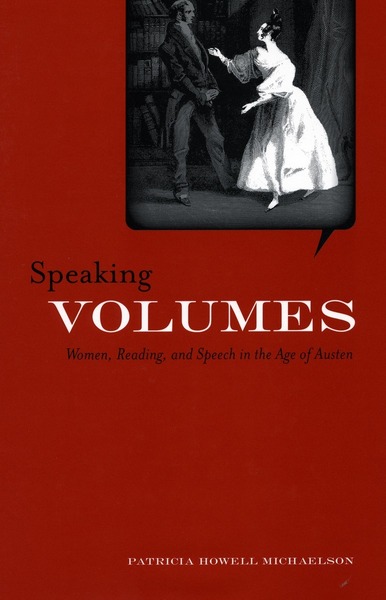 Speaking Volumes
Women, Reading, and Speech in the Age of Austen
Patricia Michaelson

Finalist in the 2003 First Book Prize, sponsored by the Modern Language Association of America.

An interdisciplinary study of women and language in England in the late eighteenth and early nineteenth centuries, Speaking Volumes focuses on the connections that contemporaries made between speech and reading. It studies the period's discourses on "woman's language" and contrasts them with the linguistic practices of individual women. The book also argues that the oral performance of literature was important in fostering domesticity and serving as a means for women to practice authoritative speech.

Utilizing a range of evidence gleaned from language texts, schoolbooks, diaries, letters, conduct books, and works of literature (notably the novels of Jane Austen), the author shows how eighteenth-century English women strategically used the stereotype of "woman's language" while insisting implicitly that gender was not always the most salient feature of their identities.

After an overview of the discourse on eighteenth-century women's speech, which emphasizes how women were lumped together as a single, deficient class of speakers, the remaining chapters each center on an individual woman to examine the historical forces her speech illuminates. The author describes Quaker language as a sociolect with norms different from those of the "polite" world, and shows how one speaker, Amelia Opie, utilized a highly mediated form of language that situated her strategically as either a Quaker or a "polite" woman.

In considering the struggle of the actress Sarah Siddons to bridge the gap between theatrical speech and ordinary language, the author relates the oral performance of literature to other forms of display that were expected of women. Using Frances Burney as exemplar, she then examines how reading together fostered domesticity. Finally, relying on the novels of Jane Austen, especially Pride and Prejudice and Persuasion, the book argues that novels took the place of conversation manuals in educating speakers.

"Speaking Volumes is a wonderfully rewarding and eloquent book. It is well written, original, and full, and it will make a difference in the way this period is theorized and read."

"The case studies . . . .are fascinating, and Michaelson is skillful in ferreting out persuasive evidence of conversations necessarily now lost . . . .She works out [the detail of her theses] with elegance, clarity, and good sense."

"Against generalizing views of women's speech and silence, Speaking Volumes unearths the inventive richness of individual speakers in the late eighteenth and early nineteenth centuries."

"...exceptionally well written, notably clear, solidly researched, and truly ground-breaking. After reading it, no scholar will be able to ignore the close connections between written and spoken language. And many of us will promptly pull out a favorite novel and sit down to read-aloud."