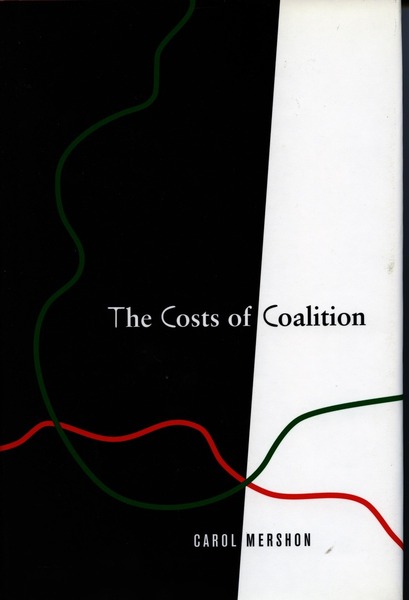 The Costs of Coalition
Carol Mershon

The Costs of Coalition tackles big questions of enduring interest in real-world politics and in political science. The substantive aim of the book is to understand and explain who governs, and for how long, under the institutions of parliamentary democracy. Its epistemological purpose is to investigate the nature of political scientists' knowledge of coalitional behavior and how to advance it.

The book starts from the well-known fact that governments in postwar Italy are extremely short-lived, and identifies a puzzle about coalition politics posed by the Italian experience. In postwar Italy until 1992, cabinets fell frequently but the same parties returned to office again and again. This book focuses on that stability—the perpetual incumbency of the Christian Democrats and the limited degree to which parties alternated between government and opposition in Italy. It probes how stability was tied to instability in Italian governments. It also compares Italian coalitions with those in nine other parliamentary democracies: Belgium, Denmark, Finland, France, Germany, Ireland, the Netherlands, Norway, and Sweden.

The author argues that the costs and benefits of building and breaking coalitions vary in systematic ways. The variations arise in part from parties' deliberate efforts to redefine payoffs in coalition politics, and they also reflect the constraints and opportunities created by the institutions of parliamentary democracy and the configuration of the party system. Under some conditions, such as those in Italy, coalitions are cheap, and politicians can easily make coalitions cheaper.

The picture of strategic behavior drawn in the book illuminates Italy's extremes and the degrees of stability found in other parliamentary democracies. In addition, the book advocates and embodies a rethinking of the relationship between game-theory literature in political science and empirical research on political institutions.

Carol Mershon is Associate Professor of Government and Foreign Affairs at the University of Virginia. She is the co-editor of Italian Politics: Ending the First Republic.

"The Costs of Coalition is an extremely valuable contribution to comparative politics . . . [which] marshals a great variety of data in a way that is readily intelligible. It will be required reading in any course on European coalition government."

"This book successfully transforms the notion of the 'costs of coalition' into a set of organizing principles for the much broader literature on government formation. Not only does it develop interesting new insights, but it also offers an exhaustive empirical exploration of many aspects of the making and breaking of governments that goes far beyond what was previously available."

" . . .The book shows that Mershon is a careful, creative, and insightful scholar. Coalition theory and comparative politics in general will greatly benefit from this book."