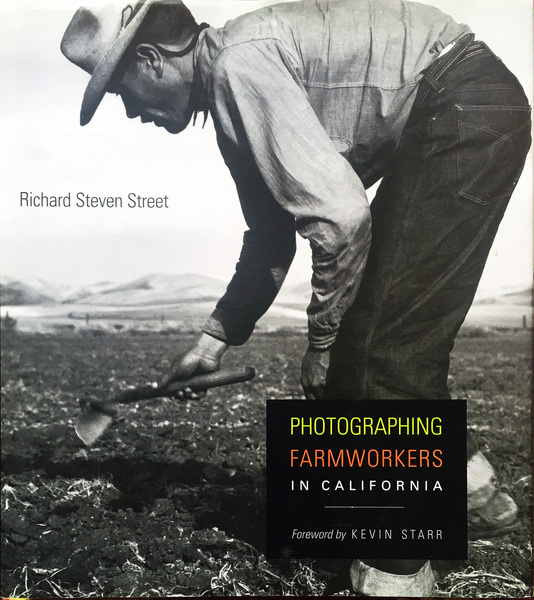 Finalist, Contemporary Letters category in the 2005 Spur Awards, sponsored by the Western Writers of America.

As exploited and colonized people, California farmworkers have attracted such massive, overwhelming photographic scrutiny that today their story cannot be told, studied, or understood without engaging the photographic dimension. Although the work of Dorothea Lange and other photographers from the 1930s often comes to mind, virtually every photographer of consequence at some time, for some reason, photographed in the fields of the Golden State. This includes such unlikely twentieth-century artists as fashion photographer Richard Avedon and commercial photographer Max Yavno, along with the nineteenth-century masters Carleton E. Watkins and Eadweard Muybridge. Their work, however, does not unfold along neat, predictable lines. While it has both obscured the place of field hands in modern agriculture and made a case against the farm labor system as an instrument of poverty and oppression, the best of these photographs goes far beyond advertising and exposé, cutting through layers of ignorance and indifference and raising difficult moral questions that force us to reflect on the extent to which, as a society, we require the subservience of an entire class of people. This volume presents 282 of these important photographs.

Richard Steven Street is an independent scholar and writer. The recipient of a Guggenheim Fellowship and a Visiting Professor and Fellow at the Stanford Humanities Center, Dr. Street has been an award-winning photographer, historian, and journalist specializing in California agriculture and agricultural labor. He is the author of Beasts of the Field: A Narrative History of California Farmworkers, 1769-1913 (Stanford, 2004), and he is currently finishing a multivolume history of California farmworkers.

"[Street's] Photographing Farmworkers records lives in beautifully stark, often haunting and at times poetic visual representations....Street's book, which includes his own stunning photography, goes beyond an anthology of photographs of farmworkers; he provides a historical overview and technical commentary at the beginning of every chapter."

"Photographing Farmworkers in California is a marvelously rich, thoughtful piece of scholarship that takes its readers on an exploration of the emotionally powerful body of photographic work relating to the lives of California's agricultural laborers. . . . [Street's] passion for the subject is matched by his expertise, and he has produced an unusual work that simultaneously draws the reader into the histories of twentieth-century documentary photography, California agriculture, and the labor struggles of farmworkers"

"Perhaps Street's most original achievement lies in combining a photographer's acute and sophisticated awareness of the constructed nature of every image with an historian's drive to reconstruct an accurate—and truthful—narrative of the past. In these two works, he invites us to reflect on the nature of image and texts as modes of knowledge and historical understanding in order to better come to terms with the extraordinary and moving history of California farmworkers."

"Richard Street's two books offer a new benchmark in the history of agricultural labor, with a perceptive, fascinating Californian focus. Only 1,283 pages? I wanted to look and read further."