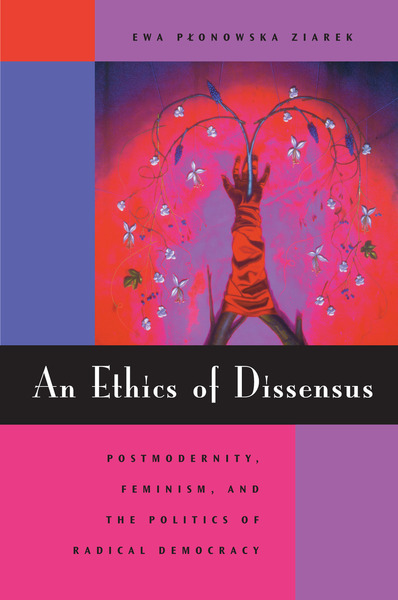 An Ethics of Dissensus
Postmodernity, Feminism, and the Politics of Radical Democracy
Ewa Płonowska Ziarek

What kind of challenge does sexual and racial difference pose for postmodern ethics? What is the relation between ethical obligation and feminist interpretations of embodiment, passion, and eros? How can we negotiate between ethical responsibility for the Other and democratic struggles against domination, injustice, and inequality, on the one hand, and internal conflicts within the subject, on the other? What are the implications of postmodern ethics for the agonistic politics of radical democracy?

We cannot address such questions, Ziarek argues, without putting into dialogue discourses that have hitherto been segregated: postmodern ethics, feminism, race theory, and the idea of radical democracy. Addressing a constellation of diverse thinkers—including Emmanuel Levinas, Patricia Williams, Jean-François Lyotard, Michel Foucault, Frantz Fanon, Julia Kristeva, and Luce Irigaray—the author proposes a new conception of ethics, an ethics of dissensus that rethinks the relation between freedom and obligation in a double context of embodiment and antagonism.

As the unavoidable yet productive dissonance among antagonism, freedom, and obligation suggests, the ethics of dissensus seeks not to transcend politics but to articulate the difficult role of responsibility and freedom in democratic struggles against racist and sexist oppression. Opposing the conservative political work of privatized moral discourse that reduces social antagonism to the apolitical experience of good and evil, the ethics of dissensus calls into question not only the depoliticized subject of ethics but also the disembodied notions of citizenship, rights, and democratic community.

Ewa Plonowska Ziarek is Associate Professor of English at the University of Notre Dame. She is the author of The Rhetoric of Failure: Deconstruction of Skepticism, Reinvention of Modernism.

"Ziarek has produced one of the most sensitive, thoughtful, original, and quietly provocative texts I know in the broad areas of contemporary philosophy and sexual and racial politics. . . . Trained in comparative literature and literary studies, she is equally at home in the most difficult and contentious of philosophical texts."

"Original, carefully argued, and beautifully written, this book is one of the first sustained attempts to think through the relationship between feminist ethics and feminist politics. Ziarek's nuanced readings of central figures in current debates in postmodern ethics provide not only new ways of interpreting their work but also new directions for ethical theory."