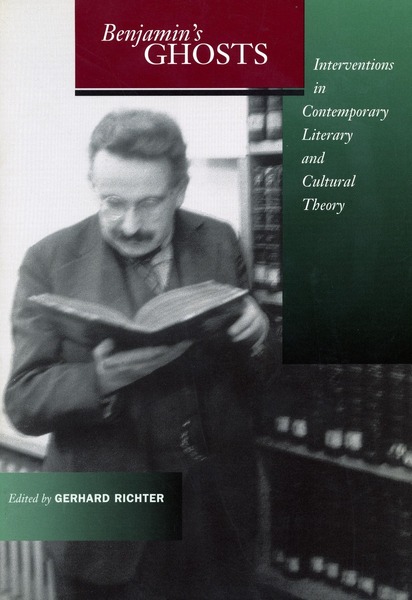 This book explores the implications for today’s critical concerns of the work of Walter Benjamin (1892-1940). Although his writings are considered to be among the most powerful and suggestive theoretical enterprises of the twentieth century, his ideas are strangely resistant to cooptation by the established doctrines of various critical programs. The innovative essays gathered here engage this resistance by examining the notion of the ghostly in Benjamin’s work.

The contributors show that the urgent and haunting truths Benjamin offers point toward new forms of responsibility, even as they withdraw from straightforward meaning and transparent forms of expression. These truths reside in a figurative elsewhere, a ghostly space that his texts delimit but never fully inhabit, and these essays seek to do justice to the ghosts of Benjamin that are already on board with us.

Through close textual readings and thoughtful contextualizations, internationally known Benjamin scholars engage a wide range of issues, including: the status of the image in Benjamin’s literary reflections and in his meditations on cinema and visual culture; abiding Benjaminian notions of messianism, aura, reproducibility, semblance, and melancholy; Benjamin’s relation to Freud; his innovative rethinking of history, virtuality, and translation; and his reflections on tragedy and prophecy, the geometrical dimensions of writing, and the relation between eros and language.

Gerhard Richter is Assistant Professor of German at the University of Wisconsin, Madison. He is the author of Walter Benjamin and the Corpus of Autobiography.

“An ensemble of American and European scholars has produced a collective endeavor of the highest scholarly, conceptual, and essayistic quality throughout. There is an enormous storehouse of creativity in this volume that establishes definitively that contemporary academic study has risen to the considerable challenge furnished by the diverse writings of Walter Benjamin.”—Henry Sussman, SUNY, Buffalo