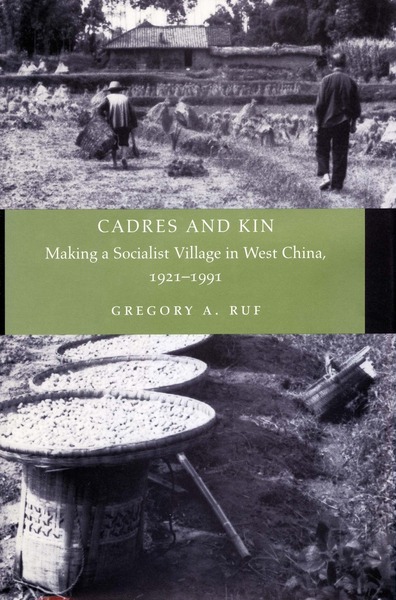 Cadres and Kin
Making a Socialist Village in West China, 1921-1991
Gregory A. Ruf

Building on ethnographic research in a rural village in Sichuan, China's most populous province, this book examines changing relationships between social organization, politics, and economy during the twentieth century. Offering a wealth of empirical data on township and village life during the pre-Communist 1930’s and 1940’s, the decades of collectivism, and the present era of post-Mao reforms, the author explores the historical development of a local state regime he characterizes as managerial corporatism.

Genealogies of power suggest that agnatic solidarity among selective patrilineal kin, as well as other modes of association based on marriage, ritual kinship, and personal friendship, were critical factors in the local political arena. The particularly close relationships that developed among a core group of local cadres and their kin during the Maoist years shaped the ways in which party-state policies were interpreted, implemented, and experienced by fellow villagers. These ties were also critical in orchestrating village industrialization and corporate community building in the 1980’s and 1990’s.

The processes of community and elite formation entailed the mobilization of some alliances of interest, emotion, and exchange while at the same time suppressing others. The author examines strategies and patterns of interfamily cooperation and conflict during the tumultuous decades—the 1920’s-1940’s— of civil unrest, inflation, and burgeoning taxation. He shows how historical relationships between local families and officials were instrumental in shaping the reorganization of rural life under Communism. The social organization of polity and economy in Qiaolou village during the reform era bore many hallmarks of both corporate and corporatist practices. Loosened state controls enabled village cadres to create new roles for themselves as economic patrons, drawing on economic, social, political, and symbolic resources to cultivate solidarity and labor discipline within the village corporation they managed.

Gregory A. Ruf is Assistant Professor of Chinese Studies and Anthropology at the State University of New York, Stony Brook.

"Free of jargon, full of interesting anecdotes, thoughtful, well-written, and short, Cadres and Kin deserves serious consideration as an introductory text on modern China. . . . The book is clearly informed by both recent anthropological theory and the latest ethnographic and historical work on 20th-century China."

"This brief but thoughtful book . . . is unusual in combining a picture of the post-1978 village with a longer narrative of twentieth-century state building and village formation."