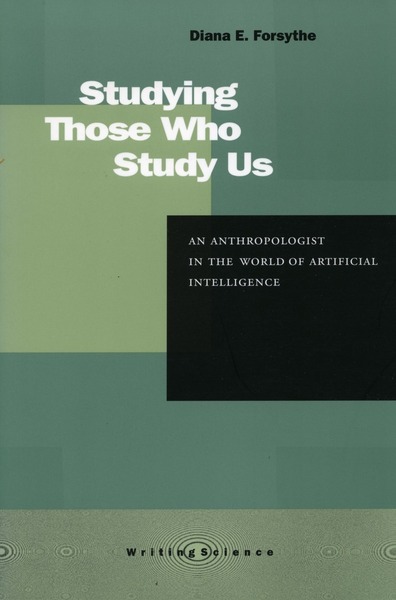 Studying Those Who Study Us
An Anthropologist in the World of Artificial Intelligence
Diana E. Forsythe Edited, with an Introduction, by David J. Hess
SERIES: Writing Science

Diana E. Forsythe was a leading anthropologist of science, technology, and work, and especially of the field of artificial intelligence. This volume collects her best-known essays, along with other major works that remained unpublished upon her death in 1997.

The essays proceed as a series of developing variations on the key questions that still confront science and technology studies today. What assumptions do expert systems designers make about users, and about knowledge more broadly, when they build software? How should humans interact with computers, and how do they, really? Why do computing firms hire anthropologists to study human-computer interaction, and what do anthropologists find once they are hired? And how and why are traditional power asymmetries between men and women produced and maintained in engineering firms and laboratories?

The book is not only a significant anthropological study of artificial intelligence and informatics, but is also an exemplar of how reflexive ethnography should be done. Among several pioneering strands of thought, it investigates the roles of gender and power in computer engineering, looking at the cultural mechanisms that support the persistent male domination of engineering, and analyzing the laboratory as a fictive kin group that reproduces gender asymmetries.

The late Diana E. Forsythe was Associate Professor in the Medical Anthropology Program at the University of California, San Francisco, and a visiting scholar in the Program in Science, Technology, and Society at Stanford University.

"Diane Forsythe pioneered the field of the anthropology of artificial intelligence, and the essays in this collection are crucially important for three reasons. First, they have historical value as groundbreaking work in a new field. Second, they have enduring value for other scholars, notably the burgeoning number of social scientists studying computer cultures. And Forsythe's careful discussions of her methods, and the interesting reflexivity she worked out, will serve as important models for future anthropologists and others. The editor has done an outstanding job of selecting, ordering, and introducing the essays." - Paul N. Edwards, University of Michigan

"The essays posthumously collected here are the fruits of the later career of a fine anthropologist and a sensitive, skilled ethnographer. . . . Forsythe's collection will interest a broad audience concerned with the production of software and the behavior of teams. Highly and unreservedly recommended for all collections."

"[A] thought-provoking book . . . .[It] reveals an intriguing insight into the tacit assumptions made in the fields of artificial intelligence and current anthropology."