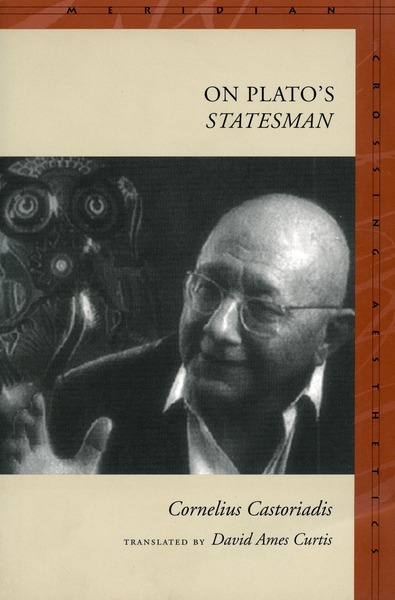 This posthumous book represents the first publication of one of the seminars of Cornelius Castoriadis, a renowned and influential figure in twentieth-century thought. A close reading of Plato's Statesman, it is an exemplary instance of Castoriadis's pragmatic, pertinent, and discriminating approach to thinking and reading a great work: "I mean really reading it, by respecting it without respecting it, by going into the recesses and details without having decided in advance that everything it contains is coherent, homogeneous, makes sense, and is true."

Castoriadis brings out what he calls The Statesman's "quirky structure," with its three digressions, its eight incidental points, and its two definitions, neither of which is deemed good. He does not hesitate to differ with the text, to show that what is, in appearance, secondary is really essential, and that the denunciation of the Sophists accommodates itself quite well to the use of sophistical procedures. Castoriadis shows how The Statesman takes us into the heart of what is distinctive in the late Plato: blending, acceptance of the mixed, of the intermediate.

These transcriptions of Cornelius's afford the reader an opportunity to discover his trenchant, convincing, energetic, provocative, and often droll voice. Here is a hitherto unknown Castoriadis, who reflects as he speaks, collects himself, corrects himself, and doesn't hesitate to revisit key points. In short, this is Castoriadis's thinking in action.

The late Cornelius Castoriadis was Director of Studies at the Ecole des Hautes Etudes en Sciences Sociales and a practicing psychoanalyst. Among his many books in English is World in Fragments: Writings on Politics, Society, Psychoanalysis, and the Imagination (Stanford, 1997).

"This book is something of an event, since it is the first time in Castoriadis's multiverse and multivolume oeuvre that he focuses on a single text. Castoriadis's range of knowledge, both historical and epistemological, is legendary, but until now we have had only cursory and fragmented instances of his genius for close reading. The Statesman is arguably one of the most difficult and idiosyncratic of Plato's dialogues, and Castoriadis literally proceeds like a detective, peeling off the layers of this deliberately disorienting text and engaging the reader in a distinct intellectual dialogue, simultaneous with his dialogue with Plato."

"This challenging study will richly reward any reader who wants to grapple with this important dialogue."