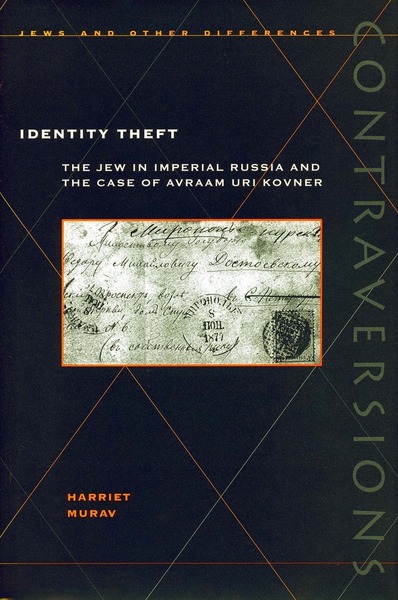 Identity Theft
The Jew in Imperial Russia and the Case of Avraam Uri Kovner
Harriet Murav
SERIES: Contraversions: Jews and Other Differences

Identity Theft focuses on the life and writing of Avraam Uri Kovner. As one of the fiery Jewish nihilists of his generation, variously a critic, author, and bank embezzler, Kovner embodies the problem of identity as a series of translations across cultural boundaries. Kovner, who initiated modern Hebrew criticism, published two novels in Russian as well as a weekly column in a widely read Russian newspaper. He forged a bank check and became notorious in the Russian press as an example of the danger integration of the Jews represented to Russian society. From prison, and later in exile, Kovner defended the Jews in a series of letters to Fedor Dostoevsky and Vasilii Rozanov, both of whom vilified Jews in their writings. Ostracized by both the Jewish and Russian communities, he mimed and at the same time undermined rigid stereotypes of Jewish and Russian behavior, pointing out the uneasy interdependence of the two cultures he inhabited.

Harriet Murav is Professor of Comparative Literature, and Slavic Languages and Literature, at the University of Illinois, Urbana-Champaign. She is the author of Russia's Legal Fictions (1998) and Holy Foolishness: Dostoevsky's Novels and the Poetics of Cultural Critique (Stanford, 1992).

"Harriet Murav has now provided English-language readers with the first comprehensive and most insightful study of Kovner and the image of the "Jew" in late imperial Russia. Her tale is well told and of extreme interest to those fascinated by the interaction between Jewish identity and anti-Semitism in the nineteenth-century."

"In this investigation of the life and work of Avraam Uri Kovner...Harriet Murav deploys her actue analytical skills to fashion a study that should prove satisfying to both historians and literary scholars--a remarkable and rare achievement in today's academic world. Drawing thoughtfully from current post-modern and post-colonial theory...in a discussion that is blessedly accessible and jargon-free, she brings new insights to a crucial aspect of modern Jewish history that has indeed been in need of just such a fresh approach."

"There is much here that is worthy of discussion and thought, and whether you agree or not with Murav, it is refreshing to perceive Russian-Jewish history and culture through a new theoretical paradigm."