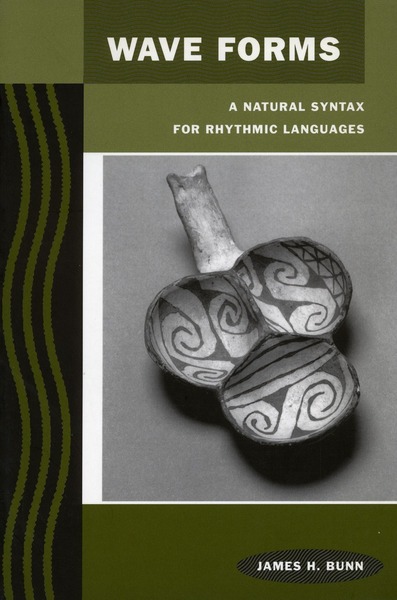 In this daring book, the author proposes that artistic and literary forms can be understood as modulations of wave forms in the physical world. By the phrase "natural syntax," he means that physical nature enters human communication literally by way of a transmitting wave frequency.

This premise addresses a central question about symbolism in this century: How are our ideas symbolically related to physical reality? The author outlines a theory of communication in which nature is not reached by reference to an object; rather, nature is part of the message known only tacitly as the wavy carrier of a sign or signal. One doesn't refer to nature, even though one might be aiming to; one refers with nature as carrier vehicle.

The author demonstrates that a natural language of transmission has an inherent physical syntax of patterned wave forms, which can also be described as certain "laws of form"—a phrase used by D'Arcy Thompson, L. L. Whyte, Noam Chomsky, and Stephen Jay Gould. He describes a syntax inherent in natural languages that derives from the rhythmic form of a propelling wave. Instead of the "laws" of a wave's form, however, the author speaks of its elements of rhythmic composition, because "rythmos" means "wave" in Greek and because "composition" describes the creative process across the arts. In pursuing a philosophy of rhythmic composition, the author draws on cognitive science and semiotics. But he chiefly employs symmetry theory to describe the forms of art, and especially the patterns of poetry, as structures built upon the natural syntax of wave forms. Natural syntax, it turns out, follows a fascinating group of symmetry transformations that derive from wave forms.

James H. Bunn is Professor of English at the University of Buffalo, where he is also a member of the Center for Cognitive Science. He is the author of The Dimensionality of Signs, Tools, and Models.