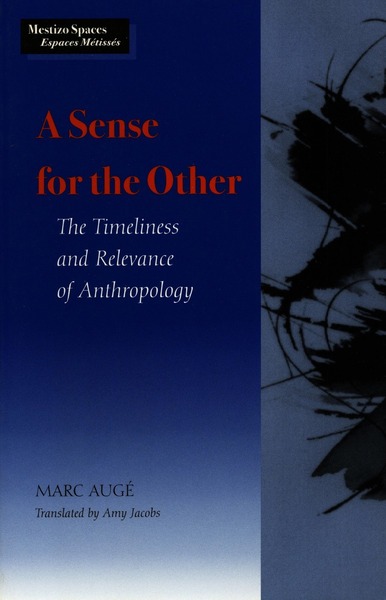 A Sense for the Other
The Timeliness and Relevance of Anthropology
Marc Augé Translated by Amy Jacobs
SERIES: Mestizo Spaces / Espaces Métissés

If the end of exoticism is one of the characteristics of our time, and if classical anthropology based its study of alterity on this exotic distance from the other, is anthropology still possible, and if so, to what end? The author uses these questions as a point of departure for a probing interrogation of ethnological practice, starting with Lévi-Strauss.

For several years, the author has advocated an anthropology of “proximity” in place of the usual anthropology of distance. He has studied such emblematic places of Western modernity as the Parisian Metro, or such emblematic “non-places” as airports or freeways, treating as valid anthropological objects phenomena that others might judge less “pure” or “significant” than systems of filiation or matrimonial alliance. The proper place of the ethnographer, he argues, is sufficiently distanced to comprehend a system as a system, yet participatory enough to live it as an individual. How can one best arrive at such a place?

This book answers by outlining an approach to anthropology that focuses on negotiating the social meanings we and others use in making sense of the world, and on the processes of identification that create the difference between same and other. Why trace a line of demarcation between societies thought to warrant and require anthropological observation and others (namely, our own) thought to demand a different type of study? Once anthropology, through its study of rites, takes social meaning as its principal object, the necessity for a “generalized anthropology” that includes the entire planet seems obvious, especially in view of the rapid proliferation of new networks of communication and the integration of individuals into those networks.

Marc Augé is President of the Ecole des Hautes Etudes en Sciences Sociales. He is the author of a dozen books, several of which have been translated into English.

"Like the work of anthropology itself, [An Antyhropology for Contemporaneous Worlds] is difficult but well worth the effort."

More in Anthropology—Theory and History