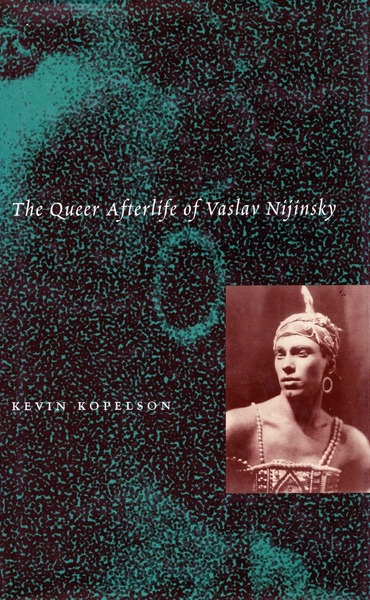 The Queer Afterlife of Vaslav Nijinsky is three books in one: an impressionistic account of the dancer's homoerotic career, an analysis of his gay male reception, and an exploration of the limitations of that analysis. The impressionistic account, based on the aestheticism of Walter Pater, focuses on significant gestures made by Nijinsky in key roles, including the Golden Slave, the Specter of the Rose, Narcissus, Petrouchka, and the Faun. The analysis of his reception, based on the semiotics of Roland Barthes, is deconstructive. And the exploration of the the analytical limitations sets the stage for cultural studies that move beyond Barthesian semiotics—beyond, that is, the author's last two books.

Why, given that most of his followers were not gay, describe Nijinsky's queer afterlife? The author's answer is that Nijinsky was the Lord Alfred Douglas of the Ballet Russes. The dancer, however, had even more "lilac-hued notoriety" than Douglas—notoriety based upon common knowledge of his sexual relationship with Serge Diaghilev, upon his having been one of the first sensuous young men to dominate a Western stage recently riven by the homosexual/heterosexual division we are still contending with today, and upon his mastery of leading roles and body languages that had very little to do with conventional masculinity.

Kevin Kopelson is Associate Professor of English at the University of Iowa. He is the author of Beethoven's Kiss: Pianism, Perversion, and the Mastery of Desire (Stanford, 1996) and Love's Litany: The Writing of Modern Homoerotics (Stanford, 1994).

"Kopelson's strategy, as in his previous work, is to bring relevant culture-studies theory to bear on gay male icons in a lively and readable way that wears its extensive learning lightly. The result is a deeply informed and very moving account of a figure who almost escapes appropriation by the language of criticism. Kopelson meets this challenge in an exemplary way, focusing in historical sequence on the performances. He is steeped in Nijinsky lore, and, just as important, knows the music. He also knows the critics, assessing them shrewdly. This is an elegant, beautifully illustrated account of the legacy of Nijinsky's ephemeral but influential work as an artist."