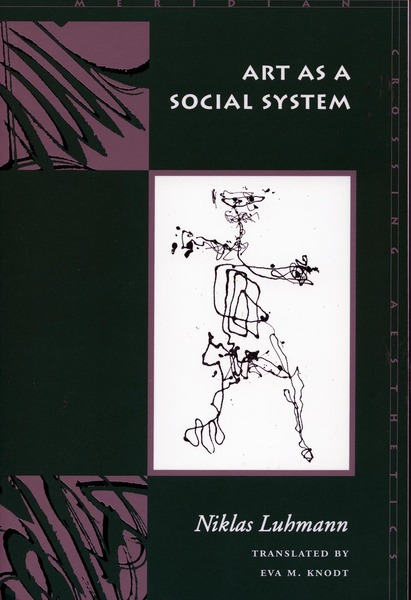 This is the definitive analysis of art as a social and perceptual system by Germany's leading social theorist of the late twentieth century. It not only represents an important intellectual step in discussions of art—in its rigor and in its having refreshingly set itself the task of creating a set of distinctions for determining what counts as art that could be valid for those creating as well as those receiving art works—but it also represents an important advance in systems theory.

Returning to the eighteenth-century notion of aesthetics as pertaining to the "knowledge of the senses," Luhmann begins with the idea that all art, including literature, is rooted in perception. He insists on the radical incommensurability between psychic systems (perception) and social systems (communication). Art is a special kind of communication that uses perceptions instead of language. It operates at the boundary between the social system and consciousness in ways that profoundly irritate communication while remaining strictly internal to the social.

In seven densely argued chapters, Luhmann develops this basic premise in great historical and empirical detail. Framed by the general problem of art's status as a social system, each chapter elaborates, in both its synchronic and diachronic dimensions, a particular aspect of this problem. The consideration of art within the context of a theory of second-order observation leads to a reconceptualization of aesthetic form. The remaining chapters explore the question of the system's code, its function, and its evolution, concluding with an analysis of "self-description."

Art as a Social System draws on a vast body of scholarship, combining the results of three decades of research in the social sciences, phenomenology, evolutionary biology, cybernetics, and information theory with an intimate knowledge of art history, literature, aesthetics, and contemporary literary theory. The book also engages virtually every major theorist of art and aesthetics from Baumgarten to Derrida.

Niklas Luhmann was Professor of Sociology at the University of Bielefeld. Among his books translated into English are Social Systems (Stanford, 1995), Observations on Modernity (Stanford, 1998), and Love as Passion: The Codification of Intimacy (Stanford paperback, 1998).

"Art as a Social System deserves to be read as a brilliant synthesis of every major philosophy of art, from Baumgarten to Kristeva, and as an ambitious attempt to understand art history in its entirety. . . . It seems inevitable that North American academics in the humanities will soon confront this challenging work."

"This book is a pleasure to read. It is literate, informed, unpretentious, and patient...The book is a spectacular example of one anthropologist's selection of the technical world as an object of study after generations of sociocultural anthropologists' bias against the same."