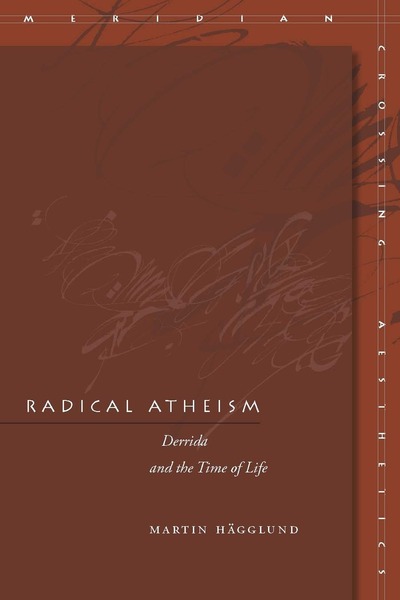 Radical Atheism presents a profound new reading of the influential French philosopher Jacques Derrida. Against the prevalent notion that there was an ethical or religious "turn" in Derrida's thinking, Hägglund argues that a radical atheism informs Derrida's work from beginning to end. Proceeding from Derrida's insight into the constitution of time, Hägglund demonstrates how Derrida rethinks the condition of identity, ethics, religion, and political emancipation in accordance with the logic of radical atheism. Hägglund challenges other major interpreters of Derrida's work and offers a compelling account of Derrida's thinking on life and death, good and evil, self and other. Furthermore, Hägglund does not only explicate Derrida's position but also develops his arguments, fortifies his logic, and pursues its implications. The result is a groundbreaking deconstruction of the perennial philosophical themes of time and desire as well as pressing contemporary issues of sovereignty and democracy.

Martin Hägglund is a Charlotte W. Newcombe Fellow in Comparative Literature at Cornell University. He is the author of Chronophobia: Essays on Time and Finitude, which was published in Swedish in 2002. In Spring 2009, CR: The New Centennial Review will publish a special issue devoted to his work.

"Martin Hägglund has produced an exceptional work. It is peerless and groundbreaking in its originality and contributes the most consistent, compelling and complete articulation of Derrida's work. In summation Radical Atheism is daring and persuasive in opening up materialist and atheistic vistas for future deconstructive analysis. Derrida is portrayed as a philosopher concerned with the thick of life in its vicissitudes. It offers a forceful account of how Derrida meditates on questions of life and death, good and evil, politics and the meaning of mortality. It will prove attractive to all readers of Derrida, professional and student alike and undoubtedly will become a definitive starting point for understanding deconstruction."

—Patrick O'Connor, Journal of the British Society for Phenomenology

"In the very insightful and intelligent book by Martin Hägglund. his analysis reaches what we could call the zero degree of deconstruction, the point at which deconstructive logics show their internal potential and cannot be assimilated to any of the various discourses—ethicist, religious, and so forth—which have tried to hegemonize it."

"In his important and hard-hitting new book, Martin Hägglund lucidly delineates the argument by means of which Derrida problematises the desire for plenitude in its various guises, and on the strength of this clarity of insight offers trenchant critiques of a number of interpretations of Derridean thought that simplify or distort it. Hägglund goes on to show in a sharper light even than Derrida elected to do how [time] provides the basis for the latter's treatment of the most far-reaching topics, starting with life itself. Hägglund has shown superbly how Derrida's account of time underlies his explorations of these ethical topics, and how unlike traditional ethical postures the results are."

"Hägglund writes so well, argues so persuasively, and clears the interpretative field in such a confident and strident manner that if one is willing to engage this work it is hard not to be swept up by it and won over to its side. Indeed it is difficult not to think that Hägglund has figured out Derrida's logic like no one else really has, that he has not so much put Derrida's thought in a nutshell as completely cracked the nut, and that no one will be able to understand Derrida's work adequately without coming to terms with the arguments Hägglund makes in this work. Arguing by means of both a judicious use of Derrida's own works and a relentless critique of many well-known commentators on Derrida, Hägglund shows the deficiencies of all other interpretations of Derrida that fail to take into account the full implications of the trace and radical finitude."

"Radical Atheism is the most accurate, insightful, and complete account anyone has produced so far of Derrida's thought. Hägglund refutes a whole panoply of influential misreadings of Derrida, and he does so with a flair and clarity rarely attained by writers on deconstruction."

"Like the best of philosophers measured by Nietzschean standards, Hägglund could be characterized as marvelously 'untimely'. [A] superlative conceptual-theoretical analysis."

"Martin Hägglund's Radical Atheism is a tour de force . . . It lives up to [its] bold claim, offering a remarkable tour of Jacques Derrida's diverse and demanding oeuvre via lucid arguments and clear prose. Hägglund demonstrates an impressive command of Derrida's corpus, marshaling these materials skillfully and effectively in rigorous, firmly grounded textual analyses . . . [It is] certainly worthy of the attention it continues to receive, both for its own merits and because any discussion of Derrida and religion will now have to attend to and contend with Hägglund's powerful text."

"A commanding and refreshing interpretation of Derrida which promises to be a crucial intervention in critical disagreements over Derrida's legacy.Radical Atheism is an important and prescient volume.It re-assesses Derrida's work and its philosophical futures with care, vision, and scholarly rigour, serving to regenerate interest in Derrida for a generation of philosophers for whom his name has fallen out of fashion."

"In this explosive little book on Derrida.Hägglund extracts and explicates what he claims is the core idea of Derrida's work, writing without the piousness, esoterism, or obliqueness that has critically imprisoned his subject. Hägglund's refutation of the idea of an ethical turn in deconstruction is definitive and his association of Derrida's thought with radical atheism is compelling."

"Especially admirable.Martin Hägglund's Radical Atheism: Derrida and the Time of Life is a decisive rejoinder to those seeking to capture deconstruction for religion."

—Jonathan Culler, preface to the 25th anniversary edition of On Deconstruction

"Impeccably argued, Radical Atheism is bound to have a significant impact on Derrida scholarship. By developing the logic of survival, Hägglund convincingly demonstrates that Derrida is essentially a philosopher of life, but of the only life there is—the life of finite beings—and hence a radical thinker of temporality. It is a very courageous book as well that critically takes issue with the negative theologians' appropriation of Derrida and makes the unprecedented argument that Derrida's reflections on the temporal conditions of life in general imply that God, if there is any, necessarily is mortal."

"With exceptional care and insight, Hägglund construes the vital implications and enduring positions of Derrida's work." 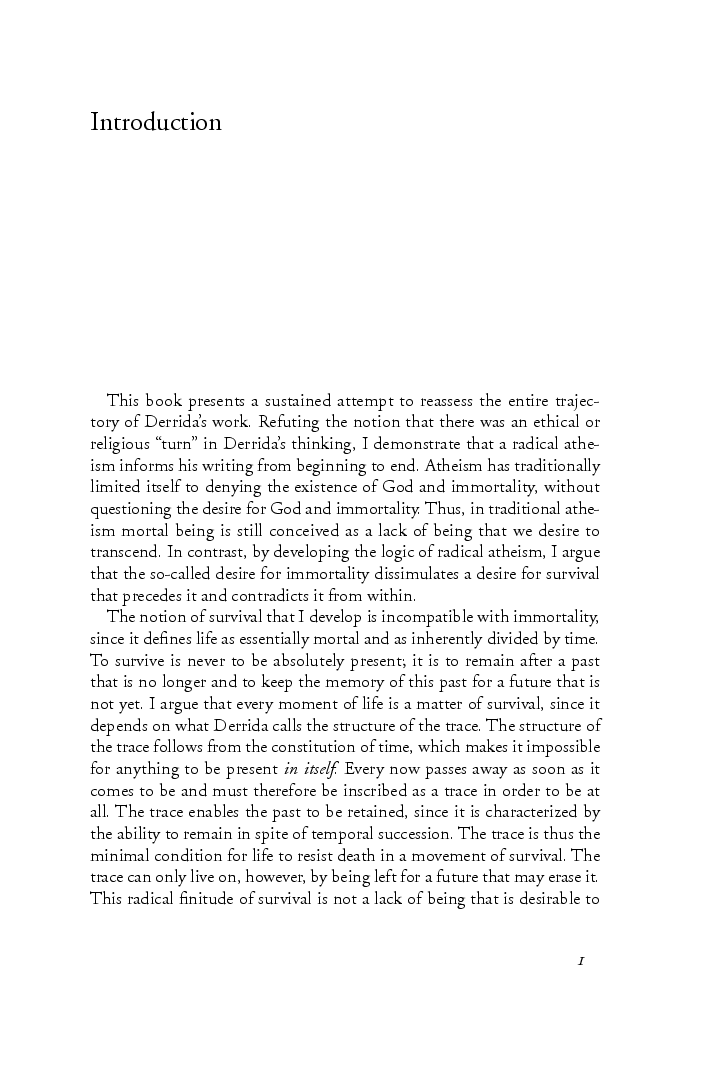 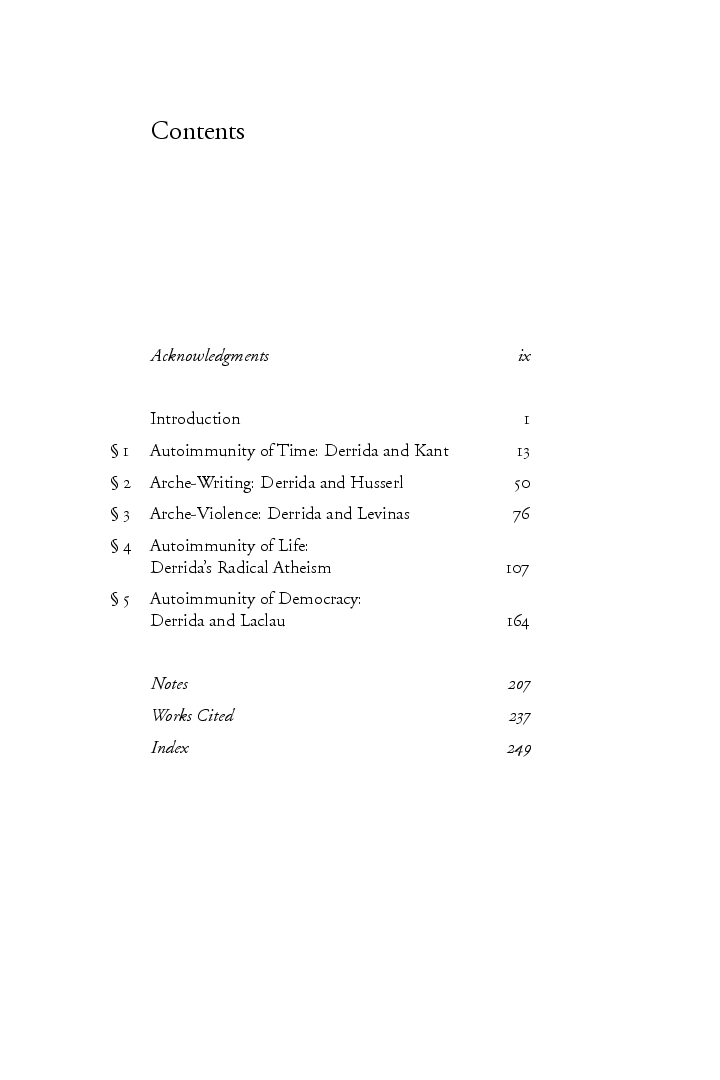