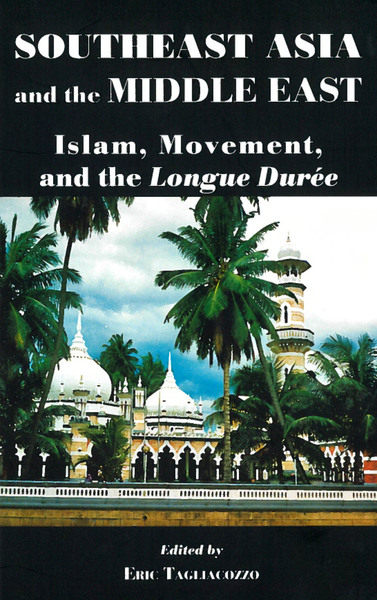 Southeast Asia and the Middle East
Islam, Movement, and the Longue Durée
Edited by Eric Tagliacozzo

Ties between Southeast Asia and the Middle East have been extremely important for well over seven hundred years, but historical linkages between the two regions have attracted little attention, and assessments of their significance are curiously lacking. Southeast Asia and the Middle East addresses this omission by exploring political, economic, familial, educational and religious bonds connecting these areas, both historically and in the contemporary world.

Islam in Southeast Asia is conventionally understood as a synthesis of Middle Eastern and local ideas. While accepting that such a distinction exists, this volume shows how ongoing interactions have helped determine the character of both regions, and Southeast Asia in particular. The pervasiveness of these influences makes it clear that they will continue to shape political and economic relations, migration patterns, the dissemination of knowledge, and radials of Islamic militancy for a long time to come. Such relationships contribute to regional and global events in many crucial ways, making the present volume timely and important not only for scholars but also for anyone interested in the future of Asia and the Middle East.

Eric Tagliacozzo is Associate Professor of History at Cornell University. His book Secret Trades, Porous Borders: Smuggling and States along a Southeast Asia Frontier, 1865-1915 (2005), won the Harry J. Benda Prize awarded by the Association for Asian Studies in 2007.

"Southeast Asia and the Middle East provides a varied survey of a centuries-cold and many-faceted relationship between two important regions of the Muslim World."

"From the 1st century to the 21st, from Mecca to Mindanao, from post-Ptolemaic geography to post-Suharto politics-- the breath-taking scope of this book is matched only by the thought-provoking quality of its scholarship."

"A timely book that provides a deep historical context to the movement of Islamist ideas and the associated radicalization of Southeast Asia and recognizes neither centres nor peripheries, Southeast Asia and the Middle East: Islam, Movement, and the Longue Dureé provides sophisticated interpretations of how waves of reform have affected both homelands. The book represents the best of the new trilingual scholarship, doing justice to both Arabic and Indonesian sources."