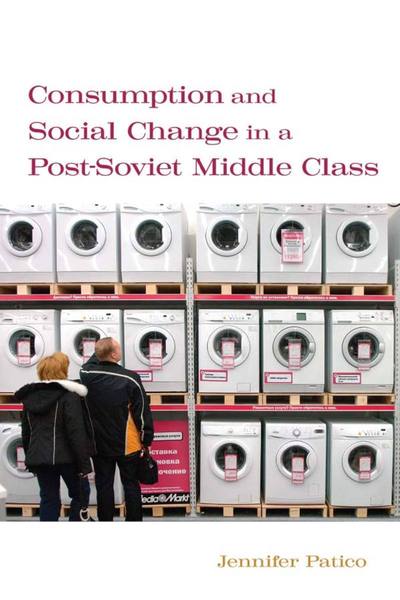 What happens when your once-dignified profession no longer supports a dignified lifestyle? In 1990s St. Petersburg, teachers had to find out the hard way. Although the institutions and ideologies of Soviet life situated them as "cultured" consumers, contemporary processes of marketization and privatization left them unable to attain what they now considered to be respectable material standards of living. In this fascinating new ethnographic study, Patico examines the various ways in which teachers have adjusted their activities and interactions as consumers, demonstrating how this has led to dramatic shifts in their assessments of their own lives and of the society around them.

Consumption and Social Change in a Post-Soviet Middle Class presents a much-needed look at the lives of ordinary people in Russia today, in the process contributing both to postsocialist studies of social change and to broader anthropological theorizations of consumption and value.

Jennifer Patico is Assistant Professor of Anthropology at Georgia State University. She was a short-term scholar affiliated with the Kennan Institute of the Woodrow Wilson Center in 2001 and 2004.

"[F]resh and fascinating . . . Although many studies have shown that middle-class culture cannot be fully understood without examining consumption and consumerism, Patico's book is one of the few that makes a serious effort to theorize this linkage . . . [T]his is an ethnographically grounded and theoretically informed book that deepens our understanding of postsocialist transformations through the lens of a Russian middle-class culture. I would recommend it highly."

"This ethnographic study of Moscow public schoolteachers ... is a fascinating exploration of the teachers' perceptions of their place in the emerging market economy and resentment of the ostentatious, 'uncultured' post-Soviet nouveau riche. Well written and accessible, this book will be useful for anthropologists, economists, cultural historians, and scholars as well as student in Russian and postcolonial studies."

"By unpacking consumption as a simultaneously pragmatic and emotional activity, Patico intervenes in current debates about how new post-Soviet persons are constituted, how consumers exercise choice and evaluate those choices, and the new meanings that commodities and practices of consumption acquire in rapidly changing societies. Ultimately, she offers a fascinating and timely glimpse into a Russia that is undergoing profound changes."

"The book makes an important contribution to the emerging analyses of middle-class culture in Russia, and highlights issues such as the shame associated with poverty that have been under-examined in previous works."

"Patico has produced a richly textured analysis that rings true for a wider swath of society than that simply comprising her teachers."