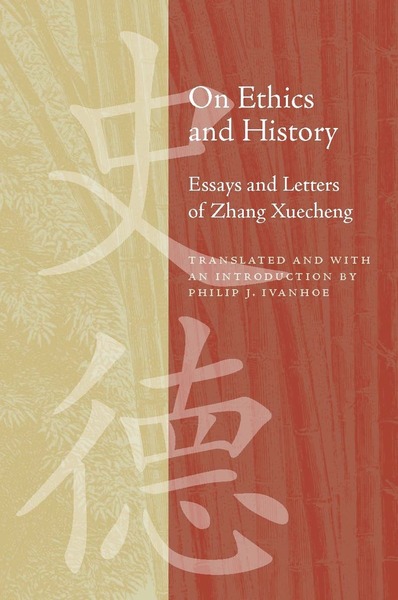 On Ethics and History
Essays and Letters of Zhang Xuecheng
Philip J. Ivanhoe

Zhang Xuecheng (1738–1801) has primarily been read as a philosopher of history. This volume presents him as an ethical philosopher with a distinctive understanding of the aims and methods of Confucian self-cultivation. Offered in English translation for the first time, this collection of Zhang's essays and letters should challenge our current understanding of this Qing dynasty philosopher. On Ethics and History also contains translations of three important essays written by Tang-dynasty Confucian Han Yu and shows how Zhang responded to Han's earlier works. Those with an interest in ethical philosophy, religion, and Chinese thought and culture will find still relevant much of what Zhang argued for in his own day.

Philip J. Ivanhoe is Reader-Professor of Philosophy in the Department of Public and Social Administration of City University of Hong Kong. A specialist in the history of East Asian philosophy and religion and its potential for contemporary ethics, he has written, edited, or co-edited more than a dozen books and published more than thirty articles and numerous dictionary and encyclopedia entries on Chinese and Western religious and ethical thought.

"[T]hanks to Philip Ivanhoe's painstaking translations, English readers can now have a glimpse of Zhang's expansive and at times also enigmatic writings."

"The greatest value of On Ethics and History is that is gives English language historians an opportunity to gain direct insight into Zhang's philosophy of history. Unknown and overlooked in his own day, Zhang is now viewed by scholars in both China and the West as the most original, innovative historians of the Qing period."

"Philip J. Ivanhoe's elegant translations of some the most philosophically percipient and coherent essays by Zhang Xuecheng fill a gaping hole in the existing literature by drawing attention to the extra-historicist aspects of the Qing savant's richly textured thought, especially its ethical iterations and dimensions."

"In this first English translation of the philosophical works of Zhang Xuecheng, normally treated as an intellectual historian, Ivanhoe has exhibited an unusually good judgment in selection. The rich notes provided, in addition to the general introduction, are extremely helpful to readers. The translation is highly readable and accurate."

"The publication of this book is the event of the year in the study of Chinese philosophy in the English-speaking world. Ivanhoe's meticulous translation, as well as his extremely perceptive introduction and tremendously helpful notes, show us that Zhang Xuecheng, who died six years before Hegel's Phenomenology of Spirit was published in Europe, has given us the first philosophical system that reconciles truth with history. Thanks to Ivanhoe's tour de force translation and commentary, we can now finally engage fully with Zhang's invigorating ideas." 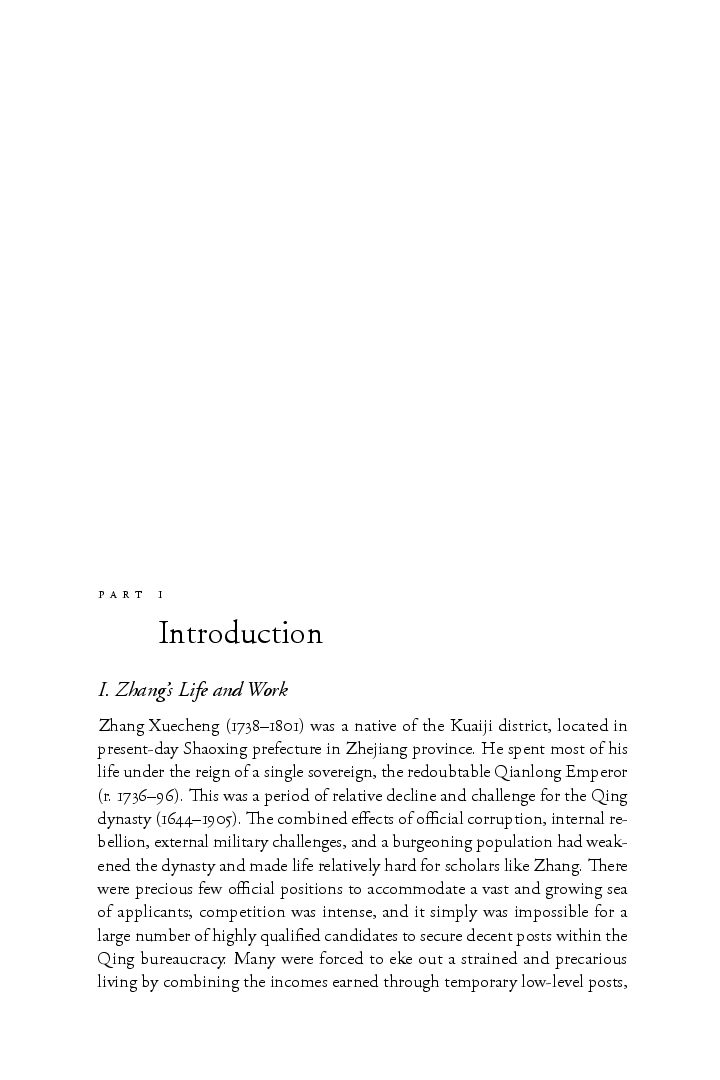 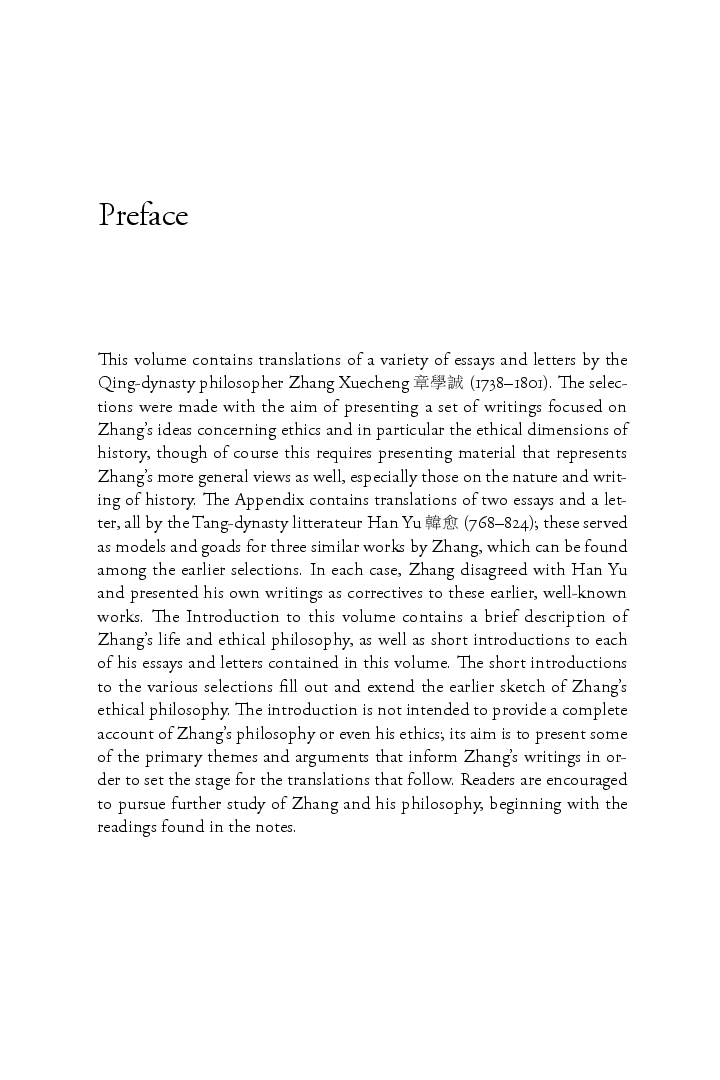 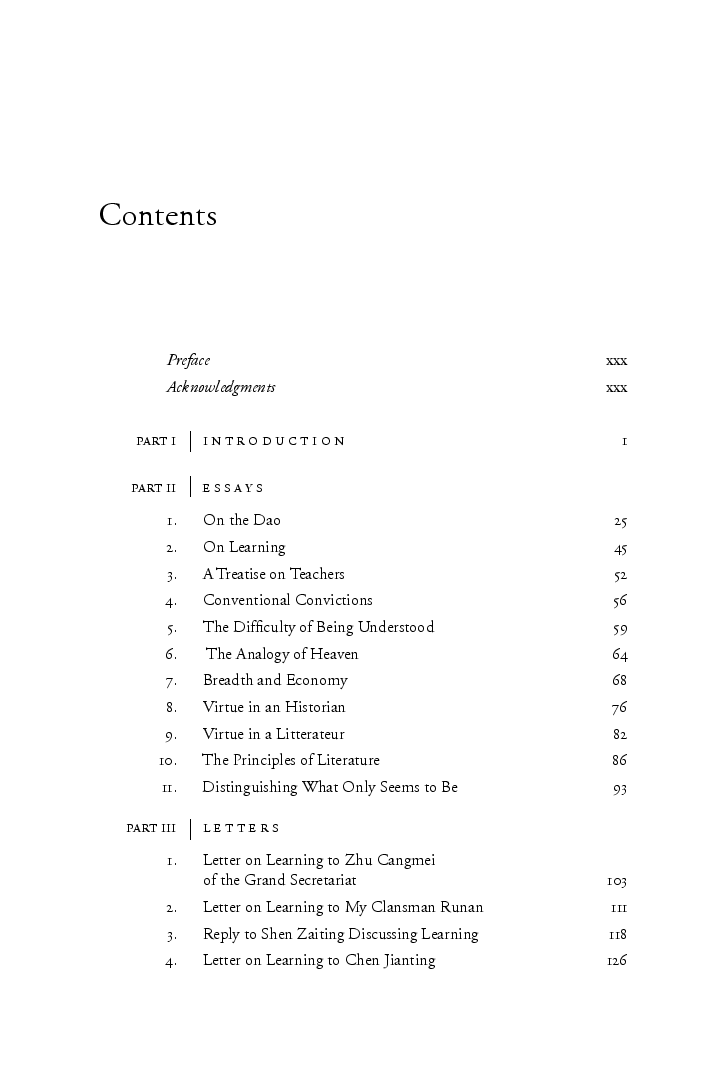