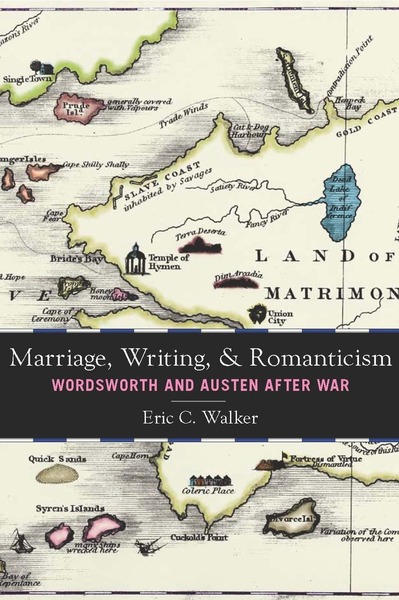 Winner of the 2010 Book Award, sponsored by the SAMLA Studies.

Marriage, Writing, and Romanticism studies marriage in two sets of literary texts from the Regency decade: the novels of Jane Austen—who avoided marriage in her own life but seems to have written about nothing else—and a set of non-canonical and generally unfamiliar poems by William Wordsworth, who seems never to turn to the subject of his own marriage.

With other Romantic writers who also figure in this study, Austen and Wordsworth confronted the impossibility of writing about anything other than marriage and the imperative either to celebrate or condemn it. Thanks to the latest scholarly editions of Wordsworth, Walker introduces previously undiscussed material.

Walker reads conjugality as the compulsory ground of modern identity, an Enlightenment legacy we still grapple with today, and offers new perspectives on literature through the writing of Austen and Wordsworth and theories of marriage in Godwin, Wollstonecraft, Hegel, Kierkegaard, and, in our time, Adam Phillips and Stanley Cavell.

"[A]n impressive and groundbreaking project . . . Marriage, Writing, and Romanticism is an important book, erudite and painstakingly researched . . . Walker's point is well taken and pursued through the course of the book with energy, creativity and great scholarly rigor, offering genuine insight into overlooked representations of contested conjugality post-Waterloo."

"An important and stimulating study, Walker's Marriage, Writing, and Romanticism is erudite, beautifully written, and the result of a career-long investment in a variety of issues whose uncanny connectedness is perhaps paramount among the study's many virtues. It is as close to the paradigm of the scholarly book as a study is likely to get."

"Marriage, Writing, and Romanticism is provocative and intelligent—and stylish. It makes a substantial contribution to Austen and Wordsworth criticism and (with Cavell's help) turns 'marriage' into an unexpectedly fascinating philosophical problem, thereby opening a new angle on a significant portion of Romantic and post-Romantic literature."