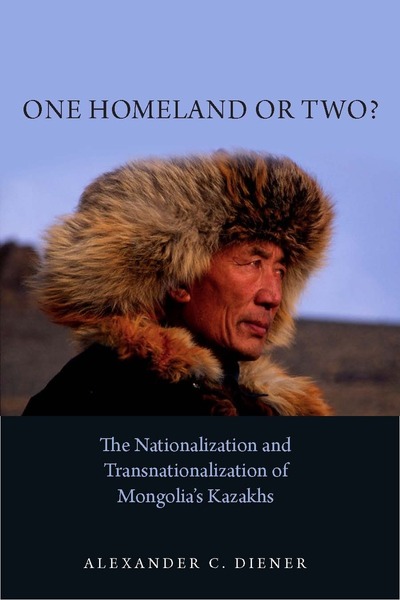 How do ethnicity and notions of a traditional homeland interact in shaping a community's values and images? As Alexander C. Diener shows in One Homeland or Two?, the answer, even in a diaspora, is far from a simple harking back to the "old country."

Diener's research focuses on the complex case of the Kazakhs of Mongolia. Pushed out of the Soviet Union, then courted by the leaders of a new post-Soviet nation—the first-ever country named after them—and facing a newly urbanized, somewhat Russianized, and culturally Sovietized homeland, Mongolia's Kazakhs have had to figure out whether they can be better Kazakhs in Kazakhstan or in Mongolia, and then how much they identify as Kazakhstanis and how much as Mongolians. Diener brings a battery of social science methodology to bear on this, especially intensive fieldwork in both Kazakhstan and Mongolia. In the end, he illustrates the complexity and dynamism of this multigenerational, diasporic community, while demonstrating that the link between identity and place, despite the effects of globalization, is far from eroding.

Alexander C. Diener is Associate Professor of Geography in the Social Science Division of Pepperdine University.

"So, One Homeland or Two? Each of the subjects finds his or her individual answer, but the plethora of answers assembled by Diener collectively form a set of lessons important to Inner and Central Asianists and to political and social scientists who work beyond state and regional boundaries."

"Basing this book on extensive fieldwork and an impressive command of the relevant academic publications and original sources in three languages, Diener has produced a masterful study of the evolving ethno-political changes being experienced today by mongolia's Kazakh communities."

"While the literature on diaspora, homecoming, and homeland is vast, there is very little discussion of these issues and concepts as they relate to the Kazakhs. This book is of great import to the international migration field."