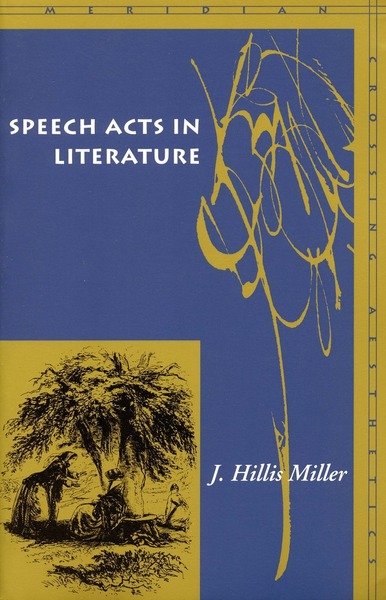 This book demonstrates the presence of literature within speech act theory and the utility of speech act theory in reading literary works. Though the founding text of speech act theory, J. L. Austin's How to Do Things with Words, repeatedly expels literature from the domain of felicitous speech acts, literature is an indispensable presence within Austin's book. It contains many literary references but also uses as essential tools literary devices of its own: imaginary stories that serve as examples and imaginary dialogues that forestall potential objections. How to Do Things with Words is not the triumphant establishment of a fully elaborated theory of speech acts, but the story of a failure to do that, the story of what Austin calls a "bogging down."

After an introductory chapter that explores Austin's book in detail, the two following chapters show how Jacques Derrida and Paul de Man in different ways challenge Austin's speech act theory generally and his expulsion of literature specifically. Derrida shows that literature cannot be expelled from speech acts—rather that what he calls "iterability" means that any speech act may be literature. De Man asserts that speech act theory involves a radical dissociation between the cognitive and positing dimensions of language, what Austin calls language's "constative" and "performative" aspects. Both Derrida and de Man elaborate new speech act theories that form the basis of new notions of responsible and effective politico-ethical decision and action.

The fourth chapter explores the role of strong emotion in effective speech acts through a discussion of passages in Derrida, Wittgenstein, and Austin. The final chapter demonstrates, through close readings of three passages in Proust, the way speech act theory can be employed in an illuminating way in the accurate reading of literary works.

J. Hillis Miller is UCI Distinguished Professor of English and Comparative Literature at the University of California, Irvine. He is the author, most recently, of Black Holes (which was published with J. Hillis Miller; or, Boustrophedonic Reading by Manuel Asensi) (Stanford, 1999)

"Miller's recent productions form a unique body of work in their own right. They are distinctive and utterly memorable in their radical differences from each other and their willingness to take extreme risks and assume ethical responsibility for their singular experiments. His seemingly insatiable creative rage remains one of the irreplaceable performances in the worlds of letters and culture."