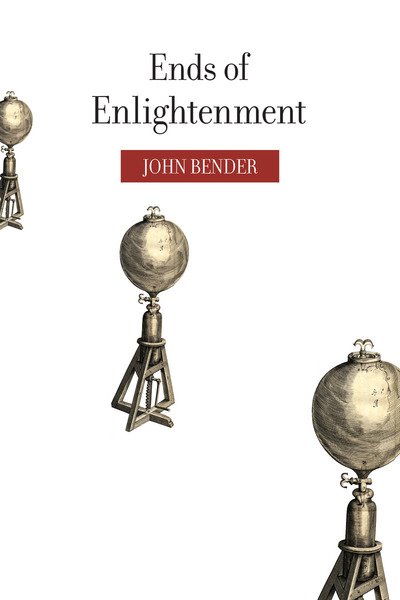 Ends of Enlightenment explores three realms of eighteenth-century European innovation that remain active in the twenty-first century: the realist novel, philosophical thought, and the physical sciences, especially human anatomy. The European Enlightenment was a state of being, a personal stance, and an orientation to the world. Ways of probing experience and knowledge in the novel and in the visual arts were interleaved with methods of experimentation in science and philosophy. This book's fresh perspective considers the novel as an art but also as a force in thinking. The critical distance afforded by a view back across the centuries allows Bender to redefine such novelists as Defoe, Fielding, Goldsmith, Godwin, and Laclos by placing them along philosophers and scientists like Newton, Locke, and Hume but also alongside engravings by Hogarth and by anatomist William Hunter. His book probes the kinship among realism, hypothesis, and scientific fact, defining in the process the rhetorical basis of public communication during the Enlightenment.

John Bender is Jean G. and Morris M. Doyle Professor in Interdisciplinary Studies at Stanford University and a former Director of the Stanford Humanities Center. His books include Imagining the Penitentiary (winner of the 1987 Gottschalk Prize) and, with Michael Marrinan, of Regimes of Description (2005) and The Culture of Diagram (20

"Bender's evident personal passions and breadth as a humanist of ample curiosity come through clearly."

"John Bender [is] a compelling critic of eighteenth-century British literature and culture. . . . Since [1987], Bender has published a number of important and groundbreaking essays, ranging widely and often brilliantly over various topics and disciplines. . . . John Bender's splendid and erudite collection of essays demonstrates . . . that one can remember the Enlightenment without longing for its return."Albert Rivero, Times Literary Supplement

"For some critics, the genre of collected essays does not flatter: it highlights the repetition and limitations of their analytic procedures. For John Bender, however, it's a showcase for his remarkable mix of conceptual flexibility and archival precision. Bender at his best is our best index to the extraordinary efflorescence of eighteenth-century studies at the turn into the new millennium. His work has transformed our understanding of the emergence of the novel from fluctuating fields of 'fact' and 'fiction,' the fate and ongoing power of rhetoric within shifting social and communication systems, and the reconstituting of knowledge into its modern forms and organization. The understanding of Enlightenment that emerges from these essays—and from the cross-currents generated by their being published together—provides that historical moment with an unprecedented purchase on the present. Bender's oeuvre is—in its accuracy and usefulness—an essential handbook for those of us who care about the legacy of Enlightenment."

"John Bender's writing on enlightenment culture has been a major inspiration for many years. Many of these essays are classics, and all repay close attention. Whether writing about anatomy or hypothesis, Hume's sentences or game theory in Laclos, Bender combines formal, socio-historical, and visual analysis into a unique wellspring for work in eighteenth-century studies. The collection is a real boon for the field and should be on the shelf of every one of its scholars." 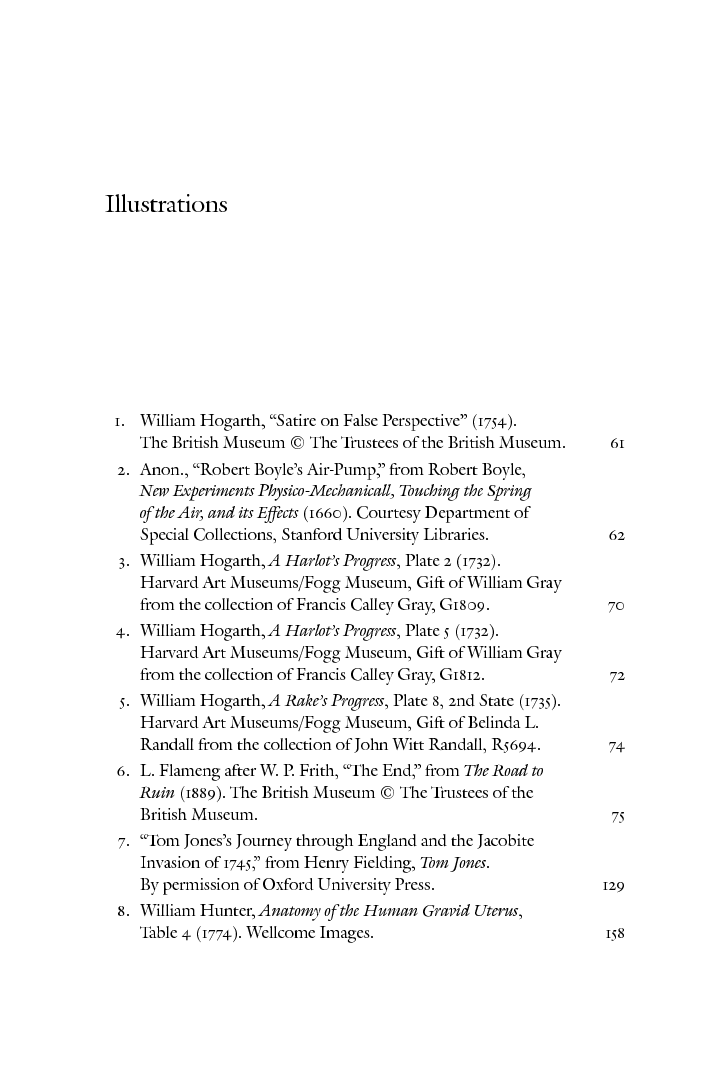 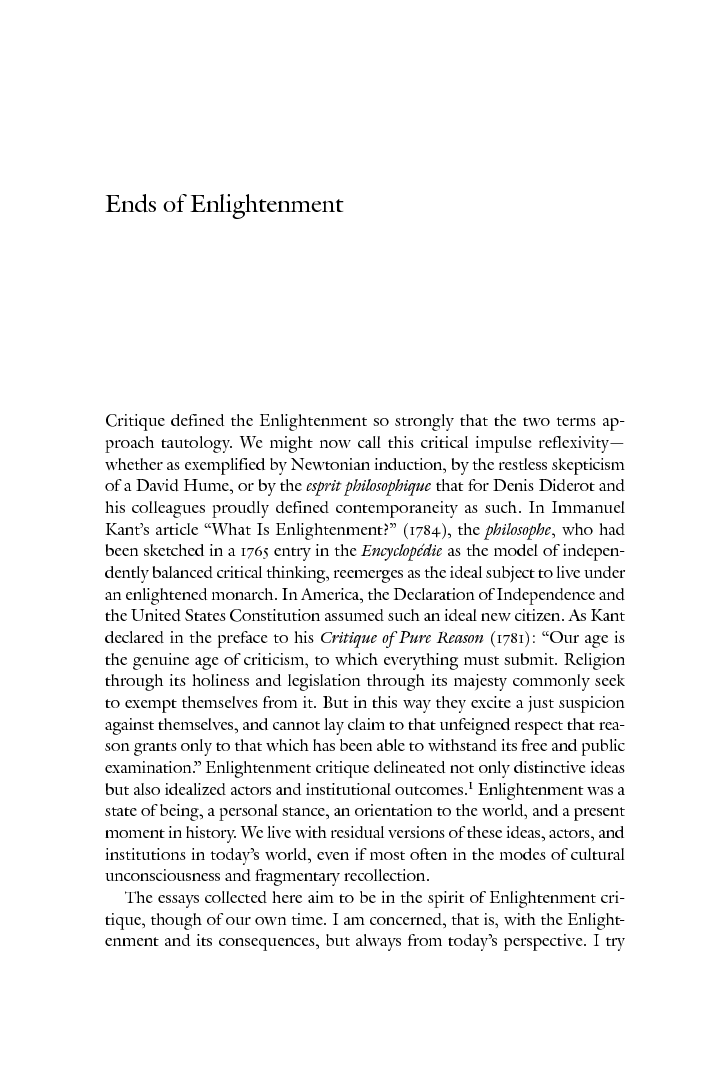 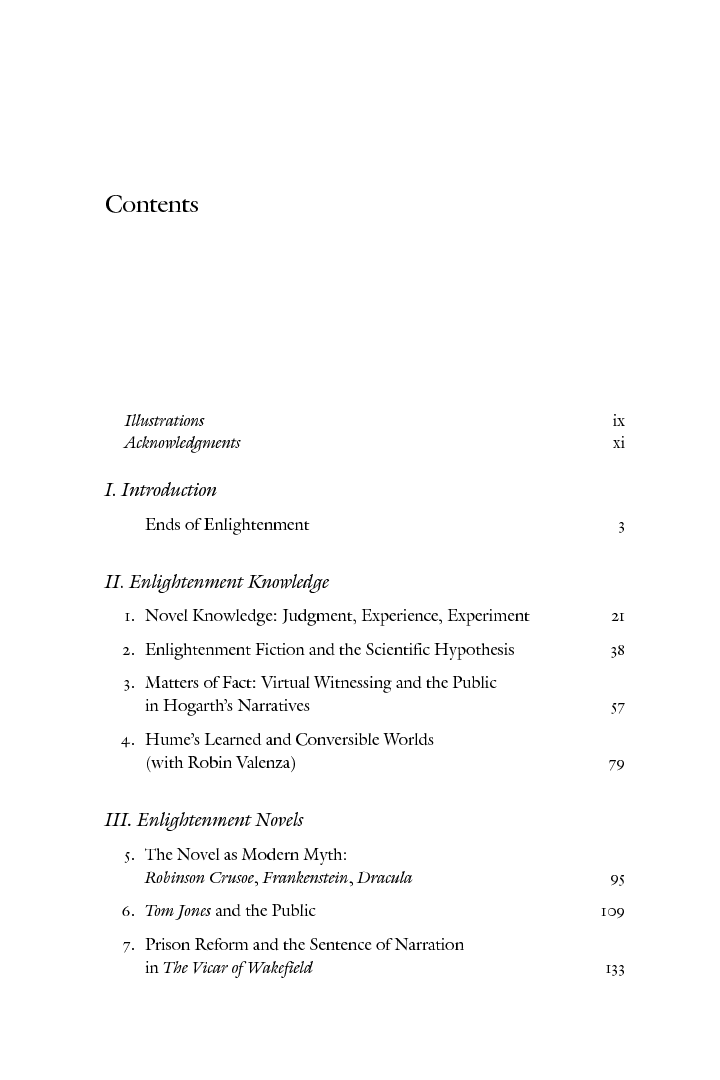