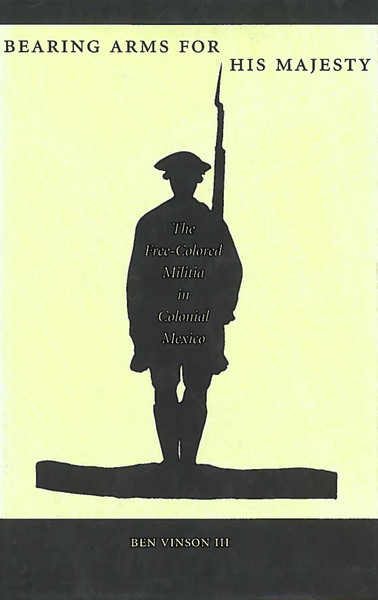 This study uses the participation of free colored men, whether mulatos, pardos, or morenos (i.e., Afro-Spaniards, Afro-Indians, or "pure blacks"), in New Spain's militias as a prism for examining race relations, racial identity, racial categorization, and issues of social mobility for racially stigmatized groups in colonial Mexico. By 1793, nearly 10 percent of New Spain's population was made up of people who could trace some African ancestry—people subject to more legal disabilities and social discrimination than mestizos, who in turn fell below white creoles, who in turn fell below the Spanish-born, in the stratified and caste-like society of colonial Spanish America.

The originality of this study lies in approaching race via a single, important institution, the military, rather than via abstractions or examples taken from particular regions or single runs of legal documents. By exploring the lives of tens of thousands of part-time and full-time free colored soldiers, who served the colony as volunteers or conscripts, and by adopting a multi-regional approach, the author is able not only to show how military institutions evolved with reference to race and vice versa, but to do so in a manner that reveals discontinuities and regional differences as well as historical trends. He also is able to examine black lives beyond the institution of slavery and to achieve a more nuanced impression of the meaning of freedom in colonial times.

From the 1550s on, free colored forces figured prominently in the colony's military forces, and units of free colored soldiers evolved with increasing autonomy in the seventeenth and eighteenth centuries. The author concludes, however, that the Bourbon reforms of the 1760s—which clearly expanded the military establishment and the role of Spanish soldiers born in the New World—came at the expense of free colored companies, which experienced a reduction in both numbers and institutional privileges.

"This outstanding work is strikingly original, covering a new, important topic through exhaustive research in a wide variety of archives in Mexico and Spain. Vinson's ability to weave together his significant findings from archival research with commentary on other scholarship is praiseworthy and not commonly achieved." - John E. Kicza, Washington State University

"Complementing Lyle N. McAlister's The "Fuero Militar" in New Spain, 1764-1800 and Christon I. Archer's The Army in Bourbon Mexico, 1760-1810, this volume by Vinson focuses on the participants in the free-colored militia of colonial Mexico. He draws his thorough analysis primarily from exhaustive investigations in Mexican national and regional archives. . . . Detailed tables and appendixes support his quantitative analysis. Upper-division undergraduates and above."

"Vinson has made an outstanding contribution to our understanding of both the Spanish colonial military and more importantly racial identity in colonial Mexico. . . . The book will be a valuable source for professional historians and students in upper-division courses of study."

"Beyond expanding our understanding of colonial defence, Ben Vinson . . . significantly improves our understanding of hegemony, agency, and identity in colonial Mexico. Using a multi-regional approach and focusing his research on the free-coloured . . . militia units, he also sheds new light on the caste/class debate, military/militia dynamics, civilian/military relations, and corporate society and politics . . . .A significant contribution to the literature."

"[A] well-researched and well-written institutional history."

"This is one of those rare books that delivers a great deal more than its title appears to promise."