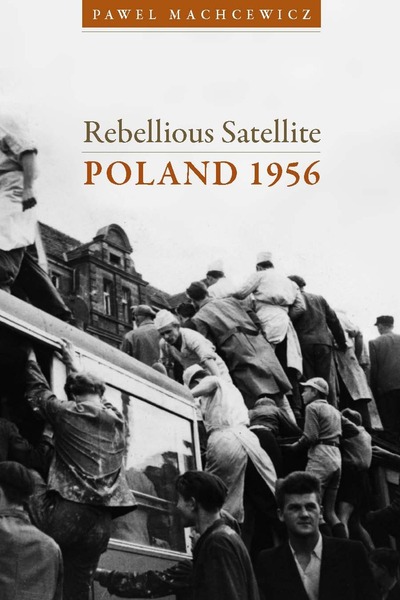 Rebellious Satellite: Poland 1956 offers a social history of the mass movements that prompted political change and altered Polish-Soviet relations in 1956 but avoided a Soviet armed response. Pawel Machcewicz focuses on the people's expression of grievances, and even riots—as opposed to "top-level" activities such as internal Communist Party struggles. He carefully depicts the protests that took place in Poznan in June 1956 and across Poland the following October and November.

The manuscript is based largely on new archival materials (mainly Party and security apparatus documents) that were originally prepared to provide detailed information to the Party leadership about what was happening on the ground. The book includes a selection of photographs from Poznan in June 1956 taken secretly by the police.

Pawel Machcewicz is currently with the Institute of Political Studies in Warsaw. He was a Cold War International History Project Scholar at the Woodrow Wilson Center in both 1994 and 2007. He was recently named the Polish Prime Minister's personal representative for the creation of a new World War II Museum in Gdansk.

"[Machcewicz presents] the voices and actions of workers and peasants and makes effective use of social movement theory to analyze the trajectory of protest and demands. The result is a vivid portrait of twelve months of upheaval: Machcewicz shows us stormy meetings in factories and in city squares; the radical language of graffiti and homemade fliers; and determined peasants reclaiming their land from the collective farms."

"Rebellious Satellite makes a real case for 1956 as the first 'People's Revolution' and it is critical for understanding subsequent communist and post-communist history."

"Machcewicz has broken away from the method of analysis dominant in the historiography of 1956, which basically limited itself to descriptions of the decisions made by the Warsaw political center combined with information about the ferment within the opinion-forming milieux of the intelligentsia."