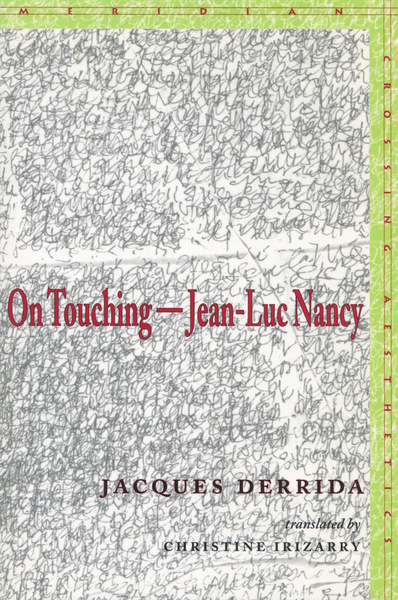 Using the philosophy of Jean-Luc Nancy as an anchoring point, Jacques Derrida in this book conducts a profound review of the philosophy of the sense of touch, from Plato and Aristotle to Jean-Luc Nancy, whose ground-breaking book Corpus he discusses in detail. Emmanuel Levinas, Maurice Merleau-Ponty, Edmund Husserl, Didier Franck, Martin Heidegger, Francoise Dastur, and Jean-Louis Chrétien are discussed, as are René Descartes, Diderot, Maine de Biran, Félix Ravaisson, Immanuel Kant, Sigmund Freud, and others. The scope of Derrida's deliberations makes this book a virtual encyclopedia of the philosophy of touch (and the body).

Derrida gives special consideration to the thinking of touch in Christianity and, in discussing Jean-Luc Nancy's essay "Deconstruction of Christianity," devotes a section of the book to the sense of touch in the Gospels. Another section concentrates on "the flesh," as treated by Merleau-Ponty and others in his wake. Derrida's critique of intuitionism, notably in the phenomenological tradition, is one of the guiding threads of the book.

On Touching includes a wealth of notes that provide an extremely useful bibliographical resource. Personal and detached all at once, this book, one of the first published in English translation after Jacques Derrida's death, serves as a useful and poignant retrospective on the work of the philosopher. A tribute by Jean-Luc Nancy, written a day after Jacques Derrida's death, is an added feature.

Jacques Derrida (1930-2004) was Director of Studies at the Ecole des Hautes Etudes en Sciences Sociales and Professor of Humanities at the University of California, Irvine. Among the most recent of his many books to have been translated into English are Rogues (2005), Eyes of the University (2004), For What Tomorrow... with Elisabeth Roudinesco (2004), Counterpath with Catherine Malabou (2004), Negotiations (2002), Who's Afraid of Philosophy? (2002), and Without Alibi (2002). All of these have been published by the Stanford University Press.

"The translation of On Touching: Jean-Luc Nancy is a momentous event, for this is one of the greatest, most important works in Derrida's immense oeuvre. It undertakes nothing less than a deconstruction of the phenomenological principle of principles, intuitionism, and the touchstone experience called touching. In a circulation through the history of philosophy since Aristotle up to the work of his contemporary and beloved friend Jean-Luc Nancy, the epochal thinker of touch, this book comes from and goes to the very heart of Derrida's thought." 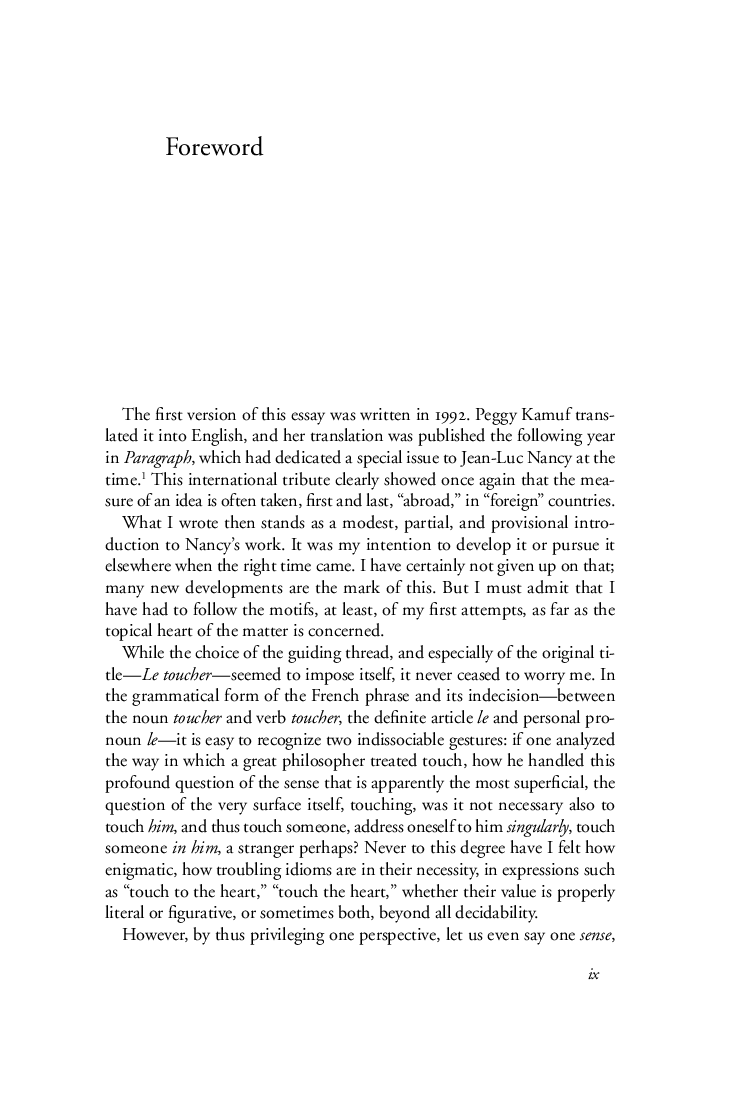