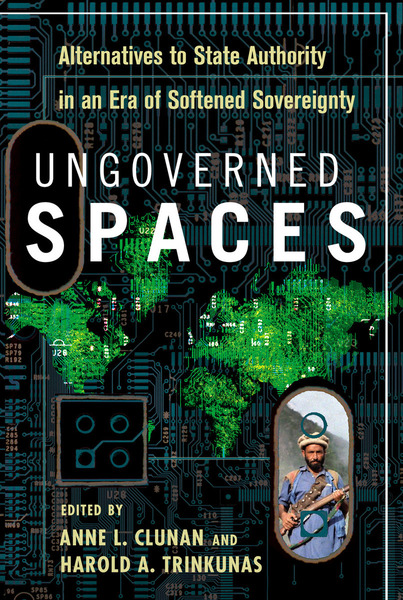 Ungoverned Spaces
Alternatives to State Authority in an Era of Softened Sovereignty
Edited by Anne L. Clunan and Harold A. Trinkunas

"Ungoverned spaces" are often cited as key threats to national and international security and are increasingly targeted by the international community for external interventions—both armed and otherwise. This book examines exactly when and how these spaces contribute to global insecurity, and it incorporates the many spaces where state authority is contested—from tribal, sectarian, or clan-based governance in such places as Pakistani Waziristan, to areas ruled by persistent insurgencies, such as Colombia, to nonphysical spaces, such as the internet and global finance.

Ultimately, Ungoverned Spaces demonstrates that state-centric approaches to these concerns are unlikely to supplant the many sites of authority that provide governance in a world of softened sovereignty.

Anne L. Clunan is an Associate Professor in the Department of National Security Affairs at the Naval Post Graduate School.

Harold A. Trinkunas is an Associate Professor and Chair of the Department of National Security Affairs at the Naval Postgraduate School.

"In Ungoverned Spaces, Clunan and Trinkunas hit on a concept that subsumes diverse problems of power and authority in 21st-century governance . . . This well-conceptualized volume includes chapters on a range of topics, including lawlessness in the slums of the developing world, struggles against global terrorism, nuclear trafficking, and money laundering. Contributors come from many disciplines (political science predominates) in the academy, government, and nongovernmental sector. This book will be of importance for collections specializing in political theory, international relations, urban and area studies, and security studies . . . Recommended."

"In the provocative book Ungoverned Spaces, Anne L. Clunan and Harold A. Trinkunas challenge the popular vision of 'ungoverned spaces' as both an inaccurate and counterproductive descriptor for the physical and conceptual regions that exist under something other than firm state control . . . Essays involving case studies—like the studies of Southern Lebanon, the Brazilian favelas, and the Pashtun tribes—provide vivid images to illustrate [the editors'] points . . . Ungoverned Spaces is worth reading for the provocative questions it poses."

"This is an excellent work, practically extraordinary. It opens a new subject for courses, gnaws at the assumptions of IR theory, and throws a spotlight on crucial policy areas. It poses new demands for a reconceptualization of theory, is adventuresomely interdisciplinary, unbound by usual conventions, and breaks down the walls between established disciplinary approaches."