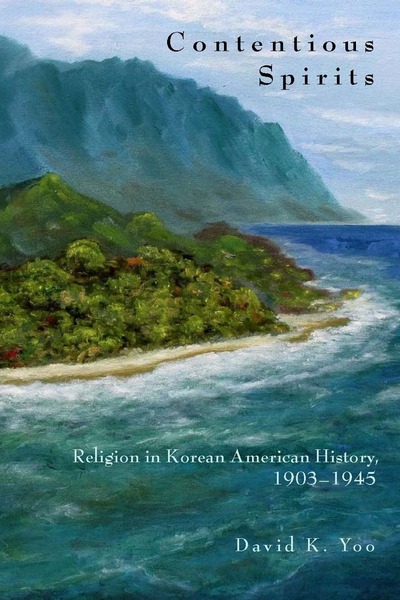 Contentious Spirits explores the role of religion in Korean American history during the first half of the twentieth century in Hawai'i and California. Historian David K. Yoo argues that religion is the most important aspect of this group's experience because its structures and sensibilities address the full range of human experience.

Framing the book are three relational themes: religion & race, migration & exile, and colonialism & independence. In an engaging narrative, Yoo documents the ways in which religion shaped the racialization of Korean in the United States, shows how religion fueled the transnational migration of Korean Americans and its connections to their exile, and details a story in which religion intertwined with the visions and activities of independence even as it was also entangled in colonialism.

"[T]he book serves well as a case study of a relatively obscure segment of American society. Many of the book's findings reinforce the importance of religion in immigrant experience, the ambiguity of immigrant identity, and the role of race in American religion. The themes also guide readers safely through the complex paths of Korean-American religious experience, working almost like a guided tour to help readers visit some of the essential events and places . . . Anybody interested in Korean American history and religion, immigrant religious communities, and religion and politics will find it informative and interesting."

"Contentious Spirits is the first (and so far only) book-length treatment of the foundational period of Korean American history . . . Yoo provides a convincing narrative of the community, showing how Protestantism helped Koreans to acclimate to American culture despite their contentiousness, even though their faith in the end could not trump the racism that barred them from fully participating in American society."

"David K. Yoo's Contentious Spirits: Religion in Korean American History, 1903-1945 is a pathbreaking study that opens up conversations not only in U.S. religious history but in the histories of race, transnational migration, and colonialism . . . The comprehensive scope of the work gives the subject matter a sweeping narrative over time."

"Yoo makes an important contribution to our understanding of the religious aspect of the Korean experience in the United States. His book is full of useful information and perspectives on the institutions and congregations of Korean churches. Yoo's analysis of the issues and problems that Koreans faced as exiled aliens in the United States is thoughtful and perspicacious. With his lucid essay, he offers a new perspective on race, nationalism, and colonialism in American history as experienced by Korean Americans."

"Contentious Spirits not only gives us a moving historical account of Protestant Christianity and early Korean American community formation, but it also provides us with the conceptual categories by which we can situate and understand this history. David Yoo deftly reveals how religious institutions and practices were shaped by, and in turn helped to shape, the prevailing patterns of racialization, diasporic consciousness, and political resistance."

"Using three diodes—religion and race, migration and exile, and colonialism and independence—Yoo examines the early Korean American experience through the lens of their (mostly Protestant) religion and its organizational structures . . . [T]his book represents a significant advance in our understanding of the prewar Korean American community."