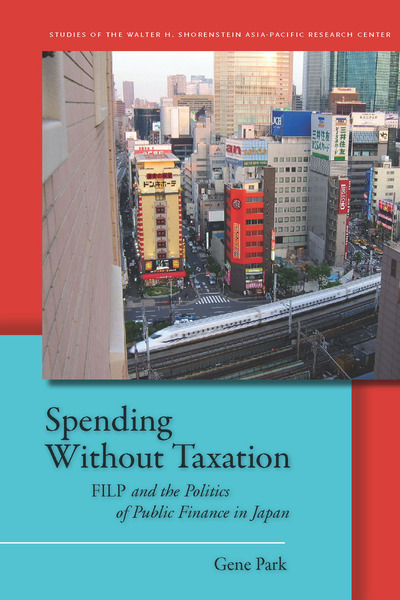 Governments confront difficult political choices when they must determine how to balance their spending. But what would happen if a government found a means of spending without taxation? In this book, Gene Park demonstrates how the Japanese government established and mobilized an enormous off-budget spending system, the Fiscal Investment Loan Program (FILP), which drew on postal savings, public pensions, and other funds to pay for its priorities and reduce demands on the budget.

Park's book argues that this system underwrote a distinctive postwar political bargain, one that eschewed the rise of the welfare state and Keynesianism, but that also came with long-term political and economic costs that continue to this day. By drawing attention to FILP, this study resolves key debates in Japanese politics and also makes a larger point about public finance, demonstrating that governments can finance their activities not only through taxes but also through financial mechanisms to allocate credit and investment. Such "policy finance" is an important but often overlooked form of public finance that can change the political calculus of government fiscal choices.

Gene Park is an assistant professor in the Department of Political Science at Baruch College. He has also been a Shorenstein Fellow at Stanford University's Asia-Pacific Research Center (APARC), and a Visiting Scholar at the Japanese Ministry of Finance's Policy Research Institute. He was also the receipient of a Fulbright IIE fellowship. He has a Ph.D. in Political Science for the University of California, Berkeley.

"[Gene Park's] book presents the important case of a government financial mechanism in Japan, the FILP, during the last six decades . . . The book provides a much clearer view of the current state of the Japanese political economy by showing how far removed it is from the heyday of Japan's political economy."

"[Spending Without Taxation] is probably one of the most exhaustive English-language works on FILP . . . [T]he book clearly explains how Japan managed to have a relatively small budget and large levels of public investment and reinforces the need for incorporating the role of policy finance in comparative studies . . . The book should be of interest not only to Japan specialists but also to comparative scholars."

"[B]eautifully written . . . Spending Without Taxation is a fine and accessible piece of scholarship that is a must-read for followers of Japanese politics . . . [and] for anyone tempted to conclude that the collapse of the economic bubble in 1990-91 marked the end of an era; as Park so convincingly reminds us, understanding the dynamic workings of enduring institutions like the FILP helps explain not only the successes of the past but also the demise of Japan's postwar recipe for economic growth and the country's current inability to move on."

"Although other governments have operated systems of policy finance, none have approached the Japanese system in size or been structured to deliberately relieve pressure on the budget so that it could remain balanced and low-tax. Park lays out a compelling puzzle leading us to ask why and how the Japanese created this system, why and how it was allowed to grow to such immense size, and then why it has begun to be reformed and wound down."

"[P]rovides a compelling rationale for FILP's importance in Japan's postwar political economy. . . . [N]o one has brought to bear the sustained focus, historical scope, or analytical rigor that Gene Park has with this book." 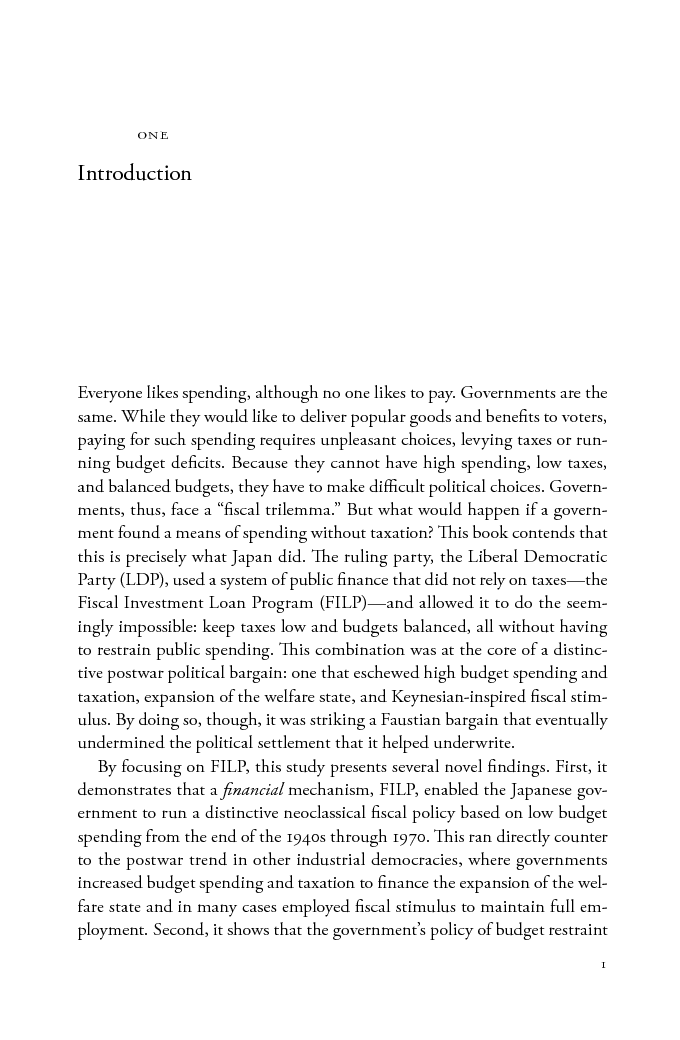 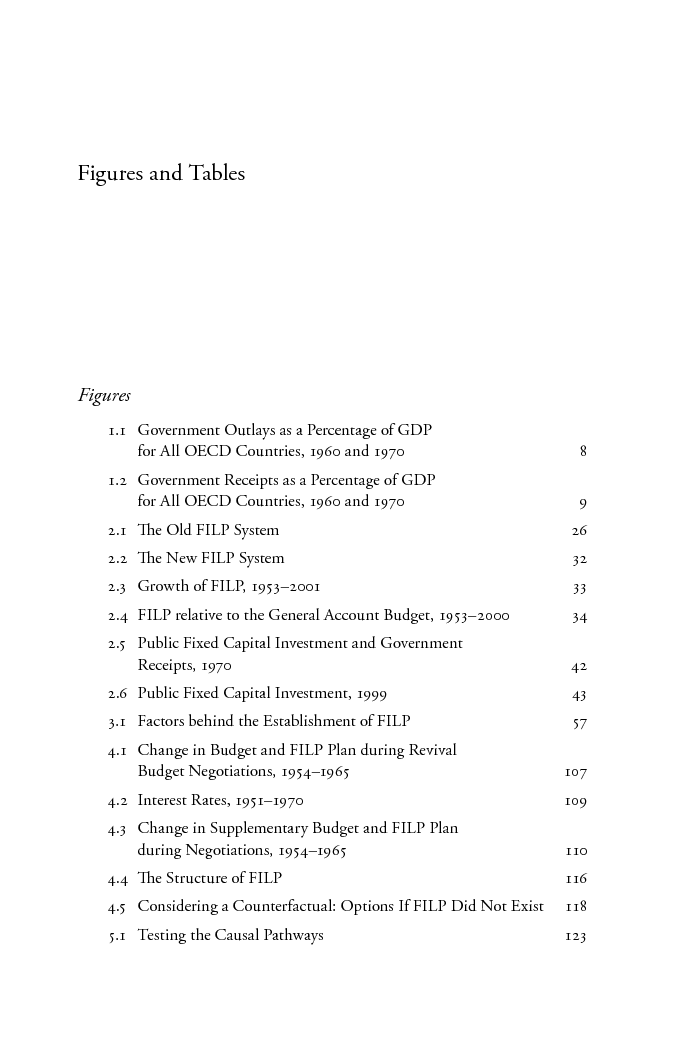 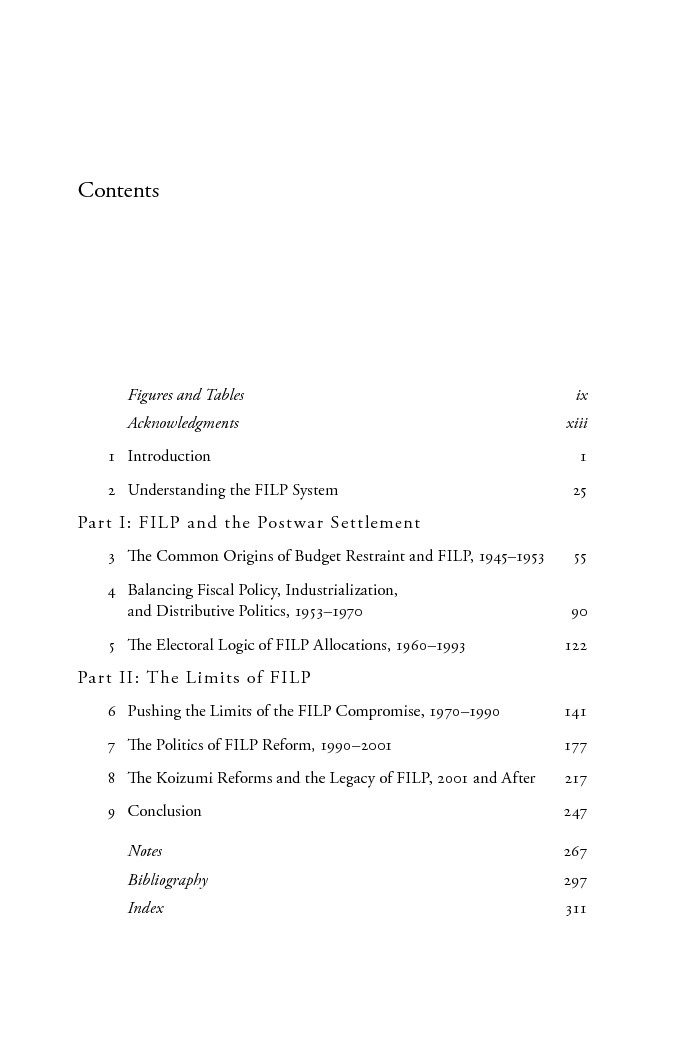