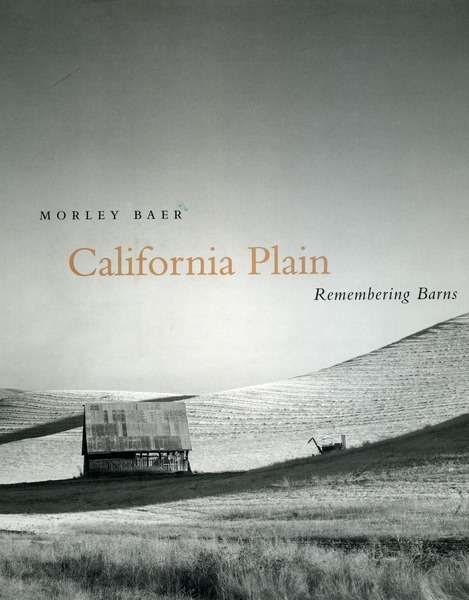 Widely acknowledged as the leading architectural photographer of Northern California, the late Morley Baer had an enduring passion for photographing barns, which he began doing in the 1950s. This book makes available fine-arts quality prints of sixty-eight extraordinary black-and-white photographs of California barns, those often ghostly but comforting shapes in a grassy pasture we glimpse as we fly down the freeway at seventy miles an hour.

The photographs also serve as a documentary record of a once common and now vanishing element of the landscape of California and the West. What is it about an old barn that wrenches a heartfelt pang from us today? Why do we photograph them, visualize them in their prime, and voice strenuous objections when new developments threaten to wipe them away? For many of us, abandoned farm structures are the focus of romantic reverie, an evocation of our agrarian roots, inviting us back to what we imagine must have been simpler, less complicated lives. A vision of life on the farm conjures a sense of wholesomeness and hard work, tillers of the soil taming the wild land as the American way of life moved West.

Enjoyment of the superb photographs will be deepened by Bright Eastman’s colorful discussion of the history and various roles and styles of barns, as well as by the description by Patrick Jablonski—Morley Baer’s last assistant—of how Baer took pictures, developed his negatives, and printed them.

" . . . [His] focus, among others, was the extraordinary nature of the most ordinary barns. Plain and simple. . . . Morley's most luminescent images reveal as much about the man as they do about the subjects, themselves."

"California Plain—Remembering Barns, a book of photography by the late Morley Baer of Carmel and edited by his widow, Frances Baer, is proof of why Morley Baer was known as his generation's premier architectural photographer of Northern California."

"Baer's lofty reputation as a photographer is amply justified by the images that are so handsomely displayed in California Plain."

"[Baer] displays a command of both camera and subject that elevates his work from photo documentation to hight art."

"These 65 fine-quality black-and-white photographs, dating from 1951 to 1994, reveal a true reverence for and love of rural architecture. . . . This is not just a regional book; it should be purchased for photography collections and wherever there are still farms and agrarian living or for readers who can appreciate simpler, less complicated lives. Highly recommended."

"Something impelled Morley Baer to capture these soulful images from 1951 to 1994, riding the backwoods, with his equipment, coming over the hill, seeing the structure, driving about it, waiting (sometimes waiting hours) for a single exposure, to capture it at its most lonely and lovely best . . . .He was a professional, and he carefully shot, carefully developed, carefully marked these treasures, driven to record the history of our land, these glorious edifices out of the sould of America."