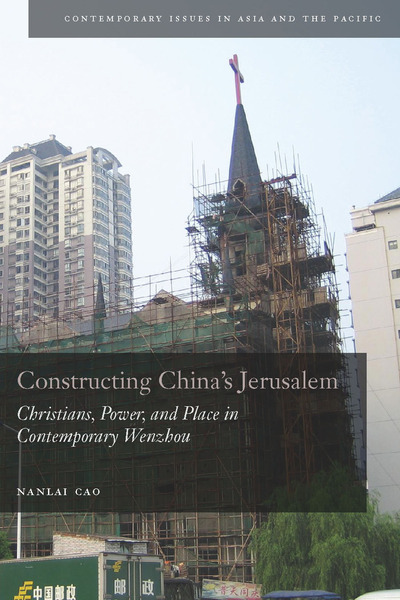 Drawing on extensive ethnographic fieldwork and in-depth life history interviews, this illuminating book provides an intimate portrait of contemporary Chinese Christianity in the context of a modern, commercialized economy. In vivid detail, anthropologist Nanlai Cao explores the massive resurgence of Protestant Christianity in the southeastern coastal city of Wenzhou—popularly referred to by its residents as "China's Jerusalem"—a nationwide model for economic development and the largest urban Christian center in China.

Cao's study of Chinese Christians delves into the dynamics of activities such as banqueting, network building, property acquisition, mate selection, marriage ritual, migrant work, and education. Unlike previous research that has mainly looked at older, rural, and socially marginalized church communities, Cao trains his focus on economically powerful, politically connected, moralizing Christian entrepreneurs. In framing the city of Wenzhou as China's Jerusalem, newly rich Chinese Christians seek not only to express their leadership aspirations in a global religious movement but also to assert their place, identity, and elite status in post-reform Chinese society.

Nanlai Cao is a research assistant professor at the Hong Kong Institute for the Humanities and Social Sciences, University of Hong Kong.

"Because of the political difficulties of studying this burgeoning population, we have had almost no in-depth ethnographic studies of Chinese Christian communities. Now in Nanlai Cao's book we have an excellent one . . . Cao's ethnography is deep and vivid. He had the advantage of originally coming from Wenzhou and thus his familiarity with the local dialect and culture. Though not a Christian himself he writes with sympathy about the Christians and is familiar with nuances of Christian theology. His analysis owes as much to the sociology as to the anthropology of religion and it is full of insights."

"This richly documented and well-written book will be of interest to scholars of contemporary China, and also could be adopted for undergraduate and graduate courses in religion and/or Chinese society and culture."

"In Constructing China's Jerusalem, Nanlai Cao provides one of the best thickly descriptive studies of Christianity's emerging role in contemporary Chinese society . . . Cao makes an important contribution to the study of Christianity in China specifically and religion in China more broadly. Additionally, his discussion of Christian identity as a symbolic resource would seem to have interesting implications for similar studies on either religion in emerging economies or the symbolic uses of religion in modern society."

"An anthropologist, Cao shows how the Christian faith works in one population center of China: Wenzhou, the huge commercial metropolis that has been called China's Jerusalem . . . [A] beautifully textured study."

"Cao excels in describing the structural features of local church and economic life: its interlacing networks, the financial support flowing from patrons to local clergy, and the business-style operations of evangelism in the city. . . . This is an excellent, informative case study, with many insights not seen elsewhere and rich with possibilities for future research."

"As yet, [Constructing China's Jerusalem] is the most comprehensive account of the complex dynamics characterising everyday life in Chinese Protestant house churches."

"[Cao's] book happily is not another narrative of Christian revival in China, but research by a social-scientist. It is a research too rare, yet stimulating enough for an understanding of the process of new "makings" in Chinese society."

"[Cao's] book provides a great ethnography of a sect of Christianity which does not fit many people's prototypes of religion in China. This book is recommended to scholars of religion, religion and state issues, Asian studies, culture, and stratification."

"[Constructing China's Jerusalem] is a fascinating glimpse into the "business" of indigenous Chinese religion with significant implications for anthropological and socioeconomic studies of Christianity in the late modern world."

"Cao makes a valuable contribution in revealing how Wenzhou boss Christianity is aligned with the principles and mechanisms of capitalism, and how faith is intermeshed with business."

"Cao's concise volume is a discerning contribution to scholarship on the evolving relationship between State and Church in the People's Republic of China . . . This is an original and thoroughly commendable study. Anyone interested in the practical elements of urban Christianity or Church-State relations in contemporary China should read it."

"Cao has judiciously selected his material and has presented an outstanding account of Chinese Christianity as China's new, urban-based rich experience it. For the scholar or layman interested in Christianity in contemporary China, Cao's account is absolutely indispensable."

"This book is about the city of Wenzhou, the so-called 'China's Jerusalem' or the 'Jerusalem of the East', and the resurgence of Protestant Christianity there. Written by a scholar who was brought up in Wenzhou and did extensive ethnographic fieldwork and in-depth life histories, in seven brief chapters, the work provides a fascinating portrait of a Wenzhou church model that enlightens out thinking about Christian mission in China today."

"Cao's work effectively shatters the 'foreign' face of Christianity and presents a religion that is highly indigenized, depoliticized and highly interpenetrated with capitalist economic behavior. . . Cao's work is extremely well-written and clearly presented. I highly recommend it to anyone who is interested in contemporary religions in China, China studies, and the anthropology of Christianity in General."

"Cao gives us the best picture I have seen of the complex pattern of relationships among the different components of contemporary urban Christianity in China today. There is nothing to compare with this stimulating read." 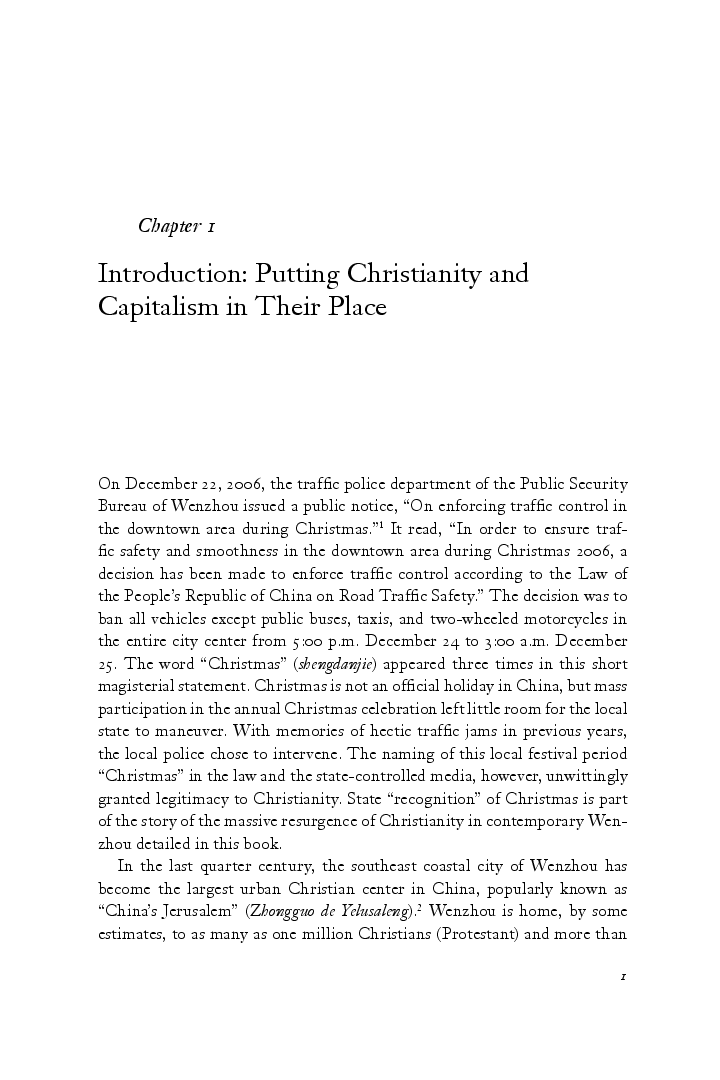 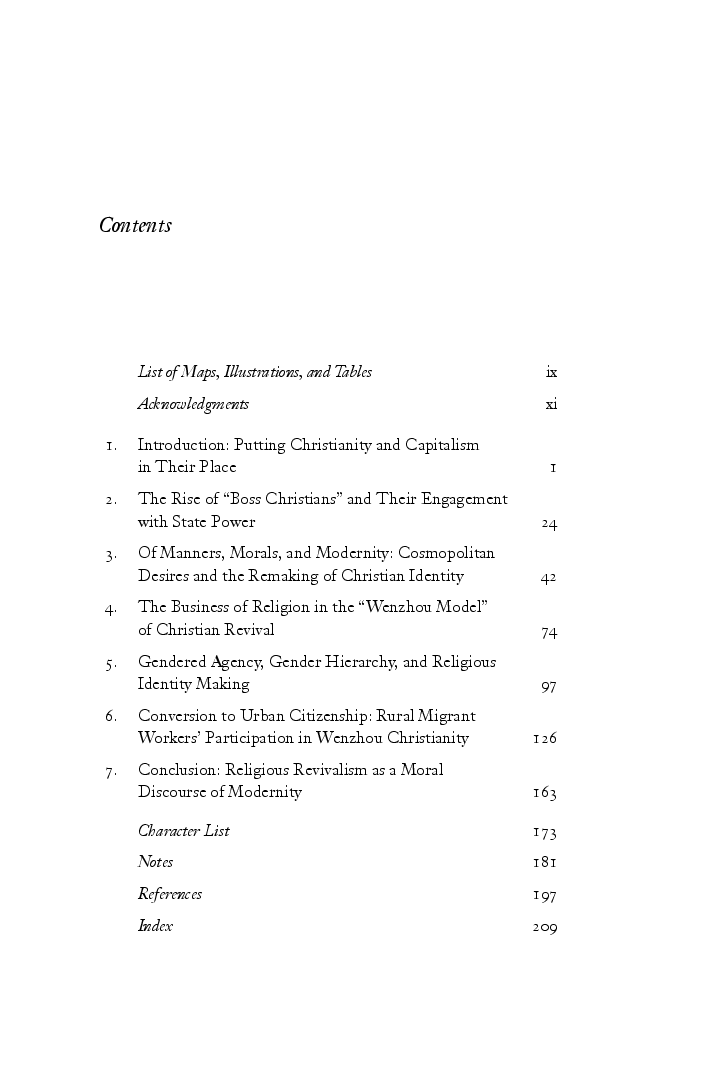