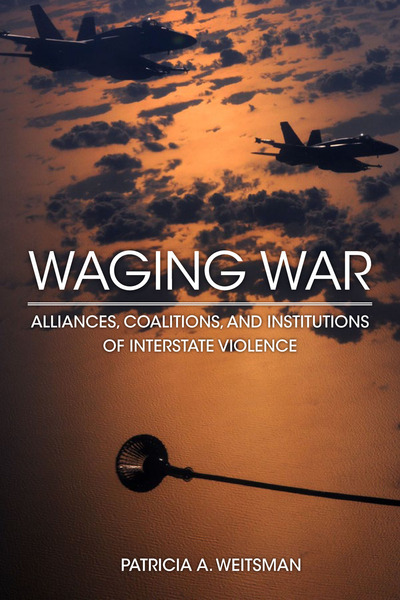 Military alliances provide constraints and opportunities for states seeking to advance their interests around the globe. War, from the Western perspective, is not a solitary endeavor. Partnerships of all types serve as a foundation for the projection of power and the employment of force. These relationships among states provide the foundation upon which hegemony is built.

Waging War argues that these institutions of interstate violence—not just the technology, capability, and level of professionalism and training of armed forces—serve as ready mechanisms to employ force. However, these institutions are not always well designed, and do not always augment fighting effectiveness as they could. They sometimes serve as drags on state capacity. At the same time, the net benefit of having this web of partnerships, agreements, and alliances is remarkable. It makes rapid response to crisis possible, and facilitates countering threats wherever they emerge. This book lays out which institutional arrangements lubricate states' abilities to advance their agendas and prevail in wartime, and which components of institutional arrangements undermine effectiveness and cohesion, and increase costs to states. Patricia Weitsman outlines what she calls a realist institutionalist agenda: one that understands institutions as conduits of capability. She demonstrates and tests the argument in five empirical chapters, examining the cases of the first Gulf War, Kosovo, Afghanistan, Iraq, and Libya. Each case has distinct lessons as well as important generalizations for contemporary multilateral warfighting.

Patricia A. Weitsman is Professor of Political Science at Ohio University. She is the author of Dangerous Alliances: Proponents of Peace, Weapons of War, and co-author of The Politics of Policy Making in Defense and Foreign Affairs.

"In articulating a new realist institutionalism approach, Weitsman contends that institutions are a key vehicle for countries to influence the behavior of other countries and in turn augment their national power . . . Recommended."

"[Waging War] deserves careful and critical consideration . . . Weitsman's model makes sense. Her thinking regarding cohesion (in that it is related directly to interests rather than alliance institutions) warrants careful consideration."

"Patricia Weitsman's book does for 21st century alliances what Glenn Snyder did for alliance politics 20 years ago: it develops a nuanced argument about how international institutions in the form of alliances and coalitions add to and constrain states' power. It will become required reading in classes at the upper division and graduate levels dealing with International Security and/or US Foreign Policy."

"Most modern wars are fought by coalitions, but we know remarkably little about the structures that have been put in place. By highlighting the tension between legitimacy and efficiency, examining several cases, developing a theory of realist institutionalism, and analyzing the implications for the American foreign policy, Weitsman has made a major contribution."

"Waging War is an important examination of the manner in which the United States has managed its war-fighting alliances and coalitions in the post-Cold War era. Patricia Weitsman argues convincingly that America's alliances, its ability to assemble coalitions of the willing, and its institutions and capacity for projecting power overseas—provided they are nurtured and carefully managed—are likely to keep it in a hegemonic position for some time to come, regardless of the increasing economic prowess of a rising China. Her examination of alliance and coalition decision-making structures, interoperability, burden-sharing, cohesion, effectiveness, costs, and legitimacy provide a wealth of lessons for U.S. policy makers navigating the treacherous national security shoals of the 21st century."

—Peter R. Mansoor, Author of Surge: My Journey with General David Petraeus and the Remaking of the Iraq War

"This manuscript is an important piece of scholarship that effectively argues that institutional arrangements significantly influence a state's ability to efficiently use its military power. This argument is unique in the realist and institutional literature. The theoretical arguments outlined in this book provide an important analysis tool for the IR scholar or practitioner; there is no direct competitor!" 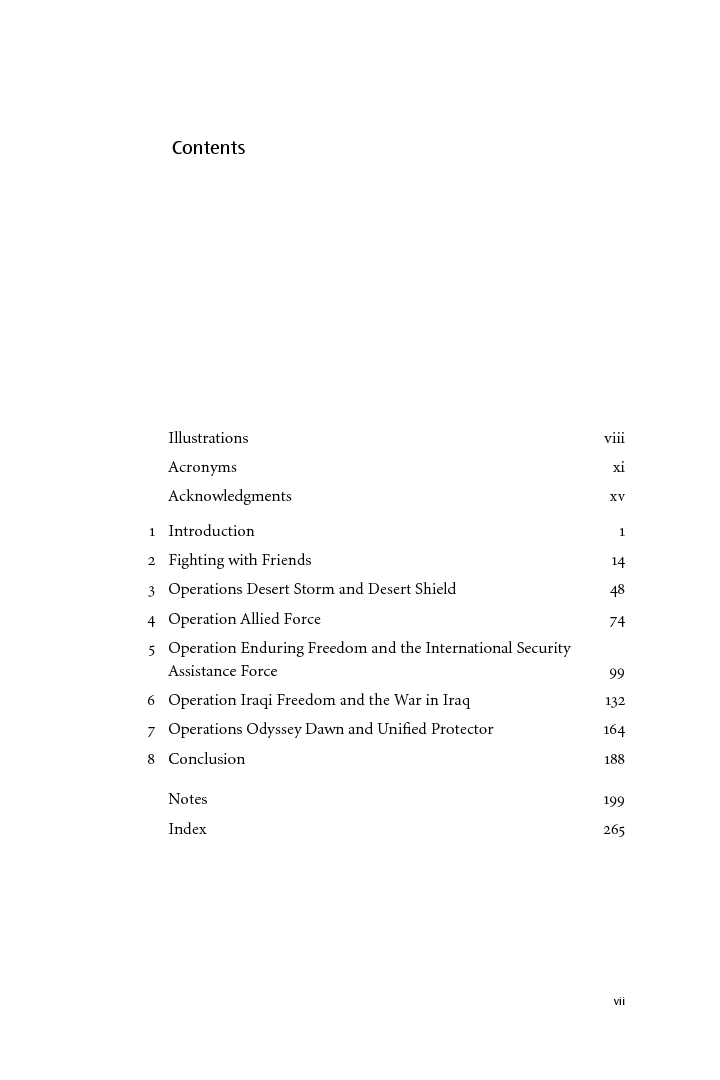 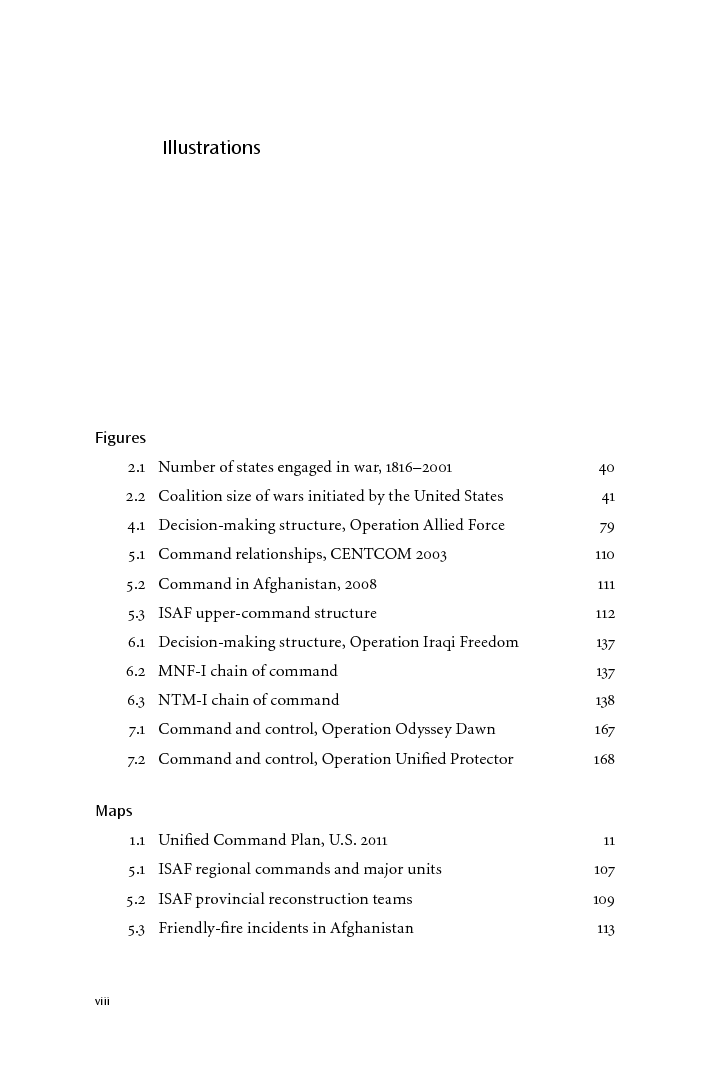 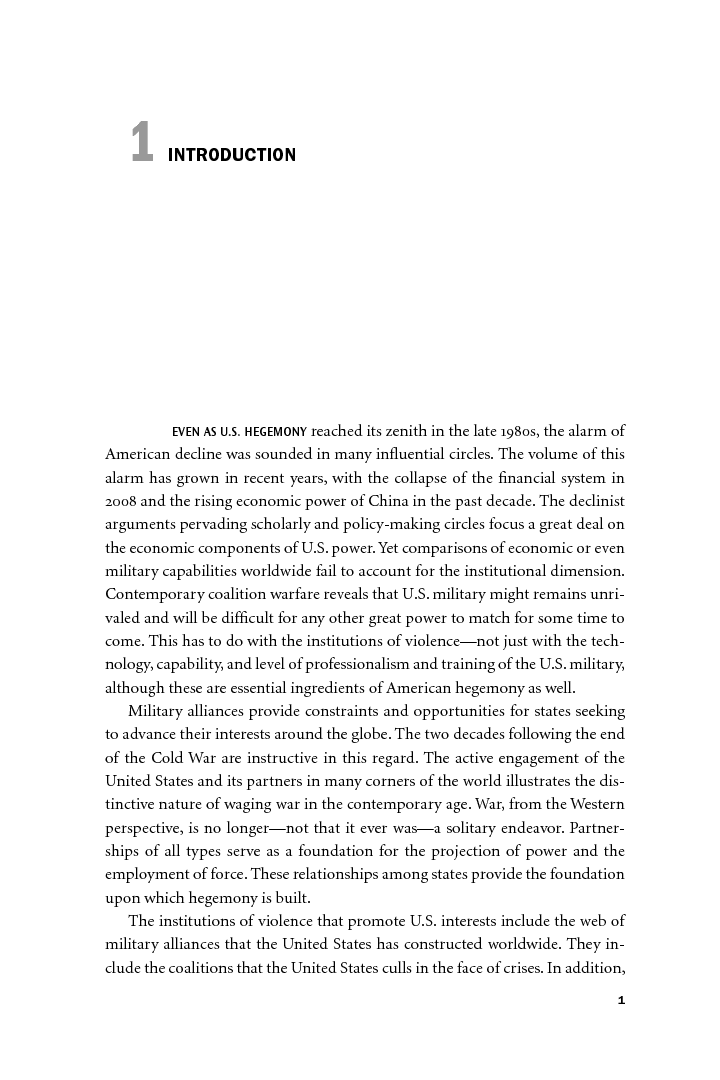