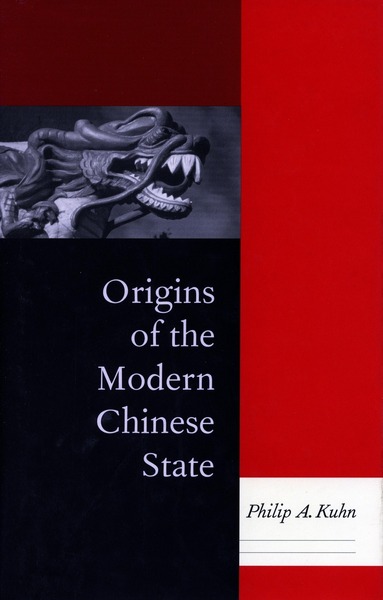 Origins of the Modern Chinese State
Philip A. Kuhn

What is “Chinese” about China’s modern state? This book proposes that the state we see today has developed over the past two centuries largely as a response to internal challenges emerging from the late empire. Well before the Opium War, Chinese confronted such constitutional questions as: How does the scope of political participation affect state power? How is the state to secure a share of society’s wealth? In response to the changing demands of the age, this agenda has been expressed in changing language. Yet, because the underlying pattern remains recognizable, the modernization of the state in response to foreign aggression can be studied in longer perspective.

The author offers three concrete studies to illustrate the constitutional agenda in action: how the early nineteenth-century scholar-activist Wei Yuan confronted the relation between broadened political participation and authoritarian state power; how the reformist proposals of the influential scholar Feng Guifen were received by mainstream bureaucrats during the 1898 reform movement; and how fiscal problems of the late empire formed a backdrop to agricultural collectivization in the 1950s. In each case, the author presents the “modern” constitutional solution as only the most recent answer to old Chinese questions. The book concludes by describing the transformation of the constitutional agenda over the course of the modern period.

Philip A. Kuhn is Francis Lee Higginson Professor of History at Harvard University. His most recent book is Soulstealers: The Chinese Sorcery Scare of 1768, winner of the Joseph Levenson Prize of the Association for Asian Stud

"This is a work of the first importance, one that successfully attempts to reach both a specialist and a broader audience. . . . It not only offers new and provocative historiographic arguments, but also recasts the familiar outline of post-1800 Chinese history in consistently novel and refreshing terms. . . . Both audiences will be intrigued by its implications for contemporary Chinese politics."

"Fluently argued and genuinely important, this work has value for specialists and generalists alike."

"Admirers of Kuhn's own writings will find in this book a consummate summing up of decades of research in late imperial and twentieth-century Chinese history. The chapters move constantly back and forth, across the twentieth-century divide and over to European and American intellectual history, seamlessly meshing archival gems with insights from wenji, gazetteers, and other published sources."

"This is a small book but one packed with much erudition and insight. The Harvard historian, Philip Kuhn, is a master of his craft, filling page after page with the wisdom of his vast experience and expertise."