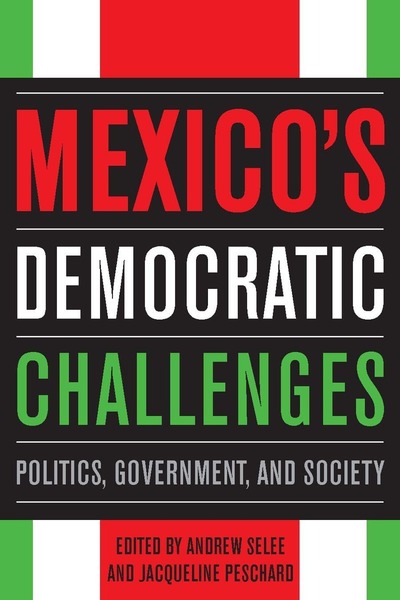 Only a decade ago, Mexico saw the end of seventy years of single-party hegemonic rule and the first free and fair election in its history. How has the country evolved since then, and what is the status of its democracy today? In this comprehensive new collection intended for use in undergraduate courses a group of distinguished scholars examines recent political developments in Mexico—including its 2006 election and the breakdown in consensus that nearly resulted—in order to assess the progress of its democratization. Focusing on transformations in Mexico's evolving political party system, institutions in transition, and the changing nature of state-society relations, contributors to this book discuss the challenges that Mexican democracy faces today as well as the potential it has for further change in the near future.

Andrew Selee is Director of the Mexico Institute at the Woodrow Wilson Center and an adjunct professor of government at Johns Hopkins University.

Jacqueline Peschard is a Citizen Counselor of Mexico's Federal Institute for Access to Information.

"Selee and Peschard's interesting and thoughtful Mexico's Democratic Challenges contains several chapters about 'institutions in transition'. The overall picture that emerges is that of a multiplocation of political and institutional actors, an 'autonomization' of their role and influence, and hence of increasing political and administrative complexity, sometimes bordering on new forms of fragmentation, instability and insecurity, not particularly conducive to improving the quality of democracy."

"This is a very important book that fills a gap in our knowledge regarding recent political change in Mexico, particularly with regard to the 2006 presidential elections and their aftermath. It broadens our understanding of democracy in Mexico beyond the electoral arena and identifies some of the main challenges for defending and expanding democratic rights."

"The value of this edited collection is that it brings the reader up to date on the numerous political and institutional reforms that have occurred since Mexico's formal transition to democracy in 2000. As such, it offers the longest view yet on the underpinnings of this country's democratization process."