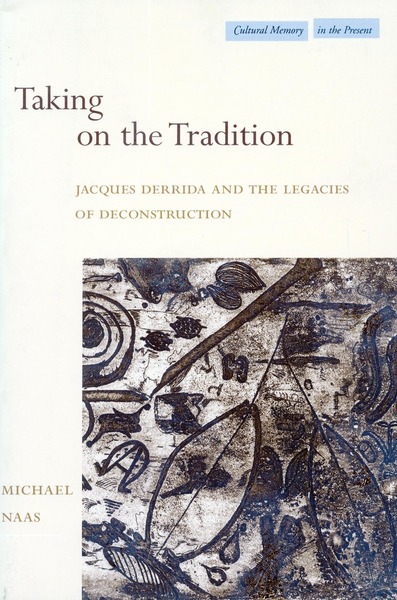 Taking on the Tradition
Jacques Derrida and the Legacies of Deconstruction
Michael Naas
SERIES: Cultural Memory in the Present

Taking on the Tradition focuses on how the work of Jacques Derrida has helped us rethink and rework the themes of tradition, legacy, and inheritance in the Western philosophical tradition. It concentrates not only on such themes in the work of Derrida but also on his own gestures with regard to these themes—that is, on the performativity of Derrida's texts. The book thus uses Derrida's understanding of speech act theory to reread his own work.

The book consists in a series of close readings of Derrida's texts to demonstrate that the claims he makes in his work cannot be fully understood without considering the way he makes those claims. The book considers Derrida's relation to the Greek philosophical tradition and to his immediate predecessors in the French philosophical tradition, as well as his own legacy within the contemporary scene.

Part I examines Derrida's analyses of Plato and Aristotle on the themes of writing and metaphor. Part II looks at themes of donation, inheritance, pedagogy, and influence in relation to Derrida's readings of the works of Michel Foucault, Jacques Lacan, and Jean-Pierre Vernant. Part III considers the promises and legacies of Derrida's work on autobiography, friendship, and hospitality, themes Derrida has recently taken up in his readings of Martin Heidegger, Maurice Blanchot, and Emmanuel Levinas.

In the Conclusion, the author analyzes what Derrida has recently called a "messianicity without messianism" and shows how Derrida develops two different notions of the future and of legacy: one that always determines a horizon for the donation and reception of any legacy or tradition, and one that leaves open a radically unknown and unknowable future for that legacy and tradition.

Michael Naas is Professor of Philosophy at DePaul University. He is the author of Turning: From Persuasion to Philosophy and editor of The Work of Mourning, a collection of essays by Derrida. He has also been a co-translator of four of Derrida's books, including Adieu to Emmanuel Levinas (Stanford, 1999) and Resistances of Psychoanalysis (Stanford, 1998).

"This is an essential purchase for academic collections and will be of interest to general readers educated in 20th century Continental philosophy."

" . . . [A]n important contribution to the efforts of a new generation to take on Derrida and to set in motion the legacy that is also the future of deconstruction."

"This truly original and insightful second book by Naas, following Turning: From Persuasion to Philosophy, is exemplary not only because of the caliber of the writing and the subtlety of the interpretations but also because it demonstrates engagements with both the philosophical and literary traditions."