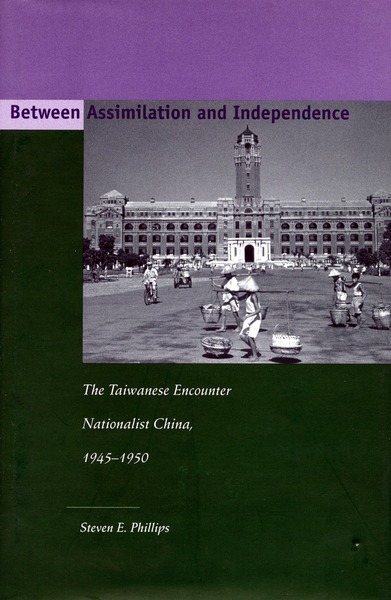 Taiwan's relationship with mainland China is one of the most fraught in East Asia, a key issue in the island's domestic politics, and a major obstacle in Sino-American relations. Between Assimilation and Independence explores the roots of this conflict in the immediate postwar period, when the Nationalist government led by Jiang Jieshi took control of the island after fifty years of Japanese rule. It is the first in-depth examination of how the Nationalists consolidated their rule over Taiwan even as they collapsed on the mainland.

During the 1945-50 period, the Taiwanese experienced disappointment with Nationalist misrule; struggles over decolonization and the Japanese legacy; a violent uprising and brutal government response; and the chaos surrounding Jiang Jieshi's retreat with his mainlander-dominated authoritarian regime. This book, based on archival materials newly available in Taiwan and the United States, shows how the Taiwanese sought to place the island between independence—becoming a sovereign nation—and assimilation into China as a province.

Steven E. Phillips is Assistant Professor of History at Towson University. He is the compiler and editor of Foreign Relations of the United States, 1969-1972, China (forthcoming).

“Steven Phillips is to be congratulated for tackling a difficult and politically sensitive topic in a scholarly, perceptive and insightful manner that enhances both Taiwan studies and China studies.”—The China Journal

“This book is both a great case study in the tensions between local and national level politics in Republican China, and an excellent investigation into a formative period in Taiwan politics...It should be read by anyone interested in the political history of either Taiwan or the Republic of China.”—China Quarterly

“Reading Phillips’s superb account of the “encouter” between the Nationalists and the Taiwanese from 1945 to 1950 has been a revelation. Moreover, in arguing his thesis, he makes every word count. It is rare to find a study that in a mere 150 pages deals with a slice of history in such a way that the reader is convinced, after finishing it, that all the important issues have been thorougly and persuasively covered.”—American Historical Review

“The book is well organized, well written, and fills a gap in the English-language literature on political development in Taiwan.”—The International History Review