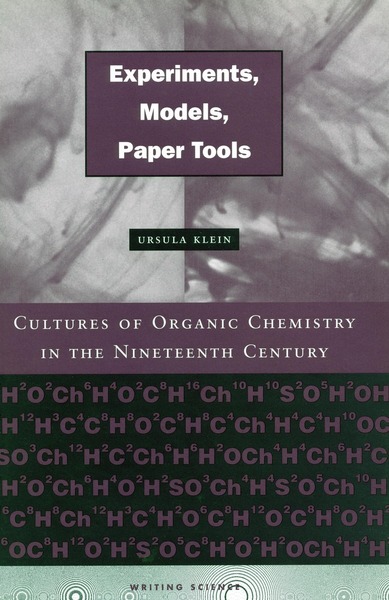 In the early nineteenth century, chemistry emerged in Europe as a truly experimental discipline. What set this process in motion, and how did it evolve? Experimentalization in chemistry was driven by a seemingly innocuous tool: the sign system of chemical formulas invented by the Swedish chemist Jacob Berzelius. By tracing the history of this “paper tool,” the author reveals how chemistry quickly lost its orientation to natural history and became a major productive force in industrial society.

These formulas were not merely a convenient shorthand, but productive tools for creating order amid the chaos of early nineteenth-century organic chemistry. With these formulas, chemists could create a multifaceted world on paper, which they then correlated with experiments and the traces produced in test tubes and flasks.

The author’s semiotic approach to the formulas allows her to show in detail how their particular semantic and representational qualities made them especially useful as paper tools for productive application.

Ursula Klein is Director of the Research Group on the History and Philosophy of Chemistry and Biochemistry at the Max Planck Institute for the History of Science in Berlin. This is her first book in English.

"This is a very valuable and stimulating book."

"[Klein] herself has made a major contribution to the philosophy and the history of chemistry by making clear the existence and the manner of a major but overlooked transformation in organic chemistry. Methodologically and substantively, this is a significant achievement."

"Experiments, Models, Paper Tools is a clear and compelling account of an important epoch in the history of organic chemistry, as well as a fine demonstration and elaboration of Klein's most fruitful investigation into the special role of systems of representation in the history of chemistry."

"...an original contribution to the history of chemistry and a fascinating book....clearly presented, intellectually stimulating, and a pleasure to read."

—British Journal of the History of Science