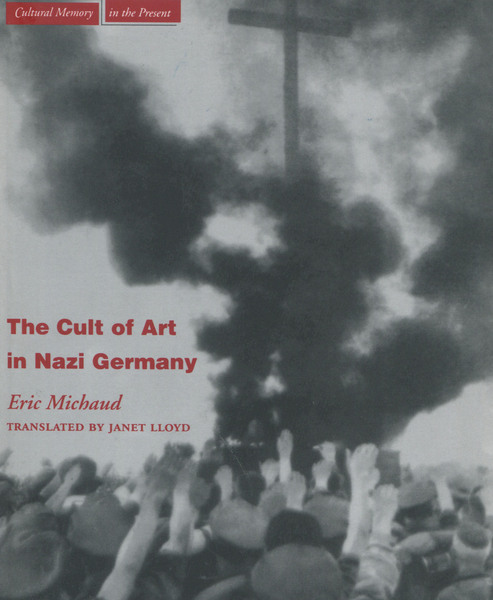 The Cult of Art in Nazi Germany
Eric Michaud, Translated by Janet Lloyd
SERIES: Cultural Memory in the Present

The Cult of Art in Nazi Germany presents a new interpretation of National Socialism, arguing that art in the Third Reich was not simply an instrument of the regime, but actually became a source of the racist politics upon which its ideology was founded. Through the myth of the "Aryan race," a race pronounced superior because it alone creates culture, Nazism asserted art as the sole raison d'être of a regime defined by Hitler as the "dictatorship of genius." Michaud shows the important link between the religious nature of Nazi art and the political movement, revealing that in Nazi Germany art was considered to be less a witness of history than a force capable of producing future, the actor capable of accelerating the coming of a reality immanent to art itself.

"The Cult of Art in Nazi Germany is a provocative attempt to analyze systematically an essential characteristic of the National Socialist state, namely, the unification of art and ritual in what the author sees as 'the Nazi myth.'"

"...this is an intriguing book that will undoubtedly fascinate many who are interested in theories about images and their potential power."

"[T]his well-researched and nicely illustrated book analyzes the place of art within National Socialist ideology and culture....anyone with an interest in Nazism or art history, including non-specialists, stands to benefit from reading this book."

"A good book for anyone interested in getting into the "why" of the Nazi movement."

"A highly original work offering a wealth of new material and a radically new perspective. It could be said that this book is a highly convincing documentation of Walter Benjamin's famous statement that fascism is the aestheticisation of politics. Michaud's analysis is provocative and disquieting because it relentlessly reveals the deep interrelation of a long aesthetic and artistic tradition of the 'creative artist' and central motifs of Christianity."

"Closely argued and intellectually dazzling, this study is essential reading, not only for historians of twentieth-century art, but for anyone interested in the visual culture of modernity."