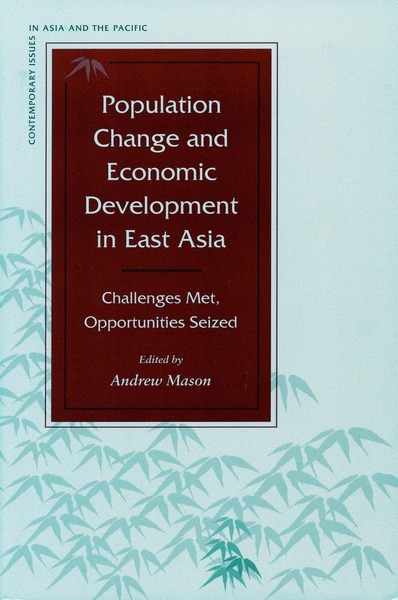 What role did population change play in East Asia’s rapid economic development? A reliable answer to the question is important because the extraordinary economic record of East Asian countries during their high-growth era (1960-90) is central to current development policy debates. This book argues that previous studies have neglected the fundamental ways in which demographic forces have influenced economic growth and regional economic integration. Consequently, the significance of East Asia’s remarkable decline in childbearing, the diminished rates of population growth, and the accompanying changes in age structure are not fully appreciated by policymakers.

The fifteen essays in this volume address two broad sets of issues. First, did rapid demographic change contribute to East Asian economic development? Specifically, what aspects of the region’s development were influenced by such demographic trends as economic growth, inequality, and the economic status of women? Second, what was the role of population policy in East Asia? What policies and programs were implemented, and which of them achieved their goals? Were demographic outcomes a product only of the region’s rapid economic development, or did population policies accelerate the transition to low fertility and slower population growth?

These questions are addressed through a detailed examination of the experience between 1960 and 1990 of six East Asian economies: Japan, South Korea, Taiwan, Singapore, Thailand, and Indonesia. The essays compare the countries’ distinctive approaches to population policies and examine the important channels through which population change has affected economic development. Among the topics covered are the impact of population on productivity and innovation; economic structure; saving, investment, and international capital flows; international labor migration; human resource development; distribution of income; and the economic status of women.

Andrew Mason is Professor of Economics at the University of Hawaii at Manoa and Senior Fellow at the East-West Center. His most recent book is Sharing the Wealth (with Georges Tapinos)

"This is a huge contribution to the most important demographic issue of the past two centuries, the importance of population growth in the process of economic development. The book reaches the decisive conclusion that population matters, and that age structure contributed dramatically to East Asia's stunning economic perfomance."

"This is a high-quality book, written by authors who are area specialists."