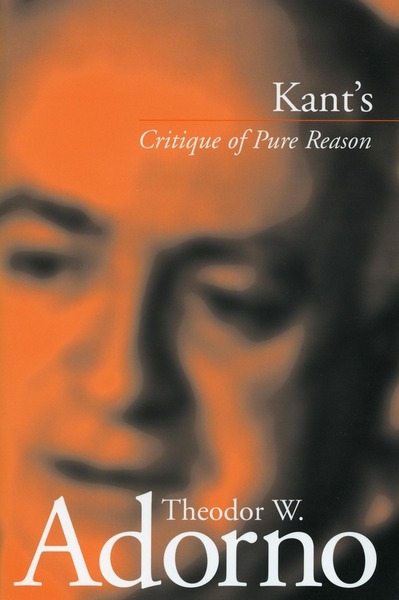 Kant is a pivotal thinker in Adorno's intellectual world. Although he wrote monographs on Hegel, Husserl, and Kierkegaard, the closest Adorno came to an extended discussion of Kant are two lecture courses, one concentrating on the Critique of Pure Reason and the other on the Critique of Practical Reason. This new volume by Adorno comprises his lectures on the former.

Adorno attempts to make Kant's thought comprehensible to students by focusing on what he regards as problematic aspects of Kant's philosophy. Adorno examines Kant's dualism and what he calls the Kantian "block": the contradictions arising from Kant's resistance to the idealism that his successors—Fichte, Schelling, and Hegel—saw as the inevitable outcome of his ideas. These lectures also provide an accessible introduction to and rationale for Adorno's own philosophy as expounded in Negative Dialectics and his other major writings. Adorno's view of Kant forms an integral part of his own philosophy, since he argues that the way out of the Kantian contradictions is to show the necessity of the dialectical thinking that Kant himself spurned. This in turn enables Adorno to criticize Anglo-Saxon scientistic or positivist thought, as well as the philosophy of existentialism.

This book will be of great interest to those working in philosophy and in social and political thought, and it will be essential reading for anyone interested in the foundations of Adorno's own work.

"This volume . . . provides wonderful insight into Adorno's understanding of Kant and also allows us to see more clearly the role Kant's thought played in Adorno's own work. . . . Hightly recommended; upper-division undergraduates through faculty and researchers."