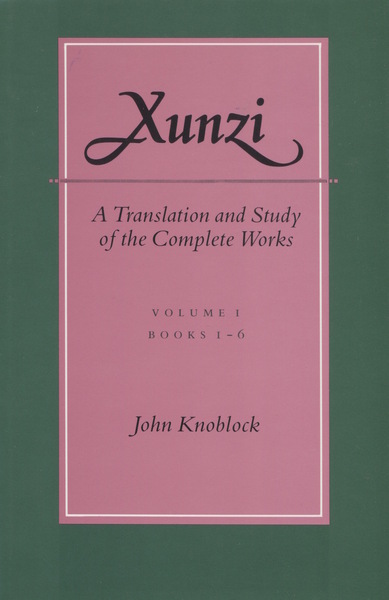 Xunzi
A Translation and Study of the Complete Works: —Vol. I, Books 1-6
John Knoblock

Coming at the end of the great flowering of philosophical inquiry in Warring States China, when the foundations for traditional Chinese thought were laid, Xunzi occupies a place analogous to that of Aristotle in the West. The collection of works bearing his name contains not only the most systematic philosophical exposition by any early Confucian thinker, but also account of virtually every aspect of the intellectual, cultural, and social life of his time. Xunzi was a social critic and intellectual historian as well as a philosopher. He was also extremely active in the political and academic circles of his day, and his teaching had a great influence on the initial institutional organization of a unified China under the first Qin emperor, an influence that continued (though often unacknowledged) through later centuries.

This is the first of three volumes that will constitute the first complete translation of Xunzi into English. The present volume consists of a general introduction and Books 1-6, dealing with self-cultivation, learning, and education.

The translation is accompanied by substantial explanatory material identifying technical terms, persons, and events; detailed introductions to each book; and extensive annotation, with characters when desirable, indicating the basis of the translations. The general introduction recounts the biography of Xunzi, his later influence, the intellectual world in which he lived, and the basic terms that the ancient Chinese used to conceptualize nature and society.

John Knoblock is Professor of Philosophy at the University of Miami.