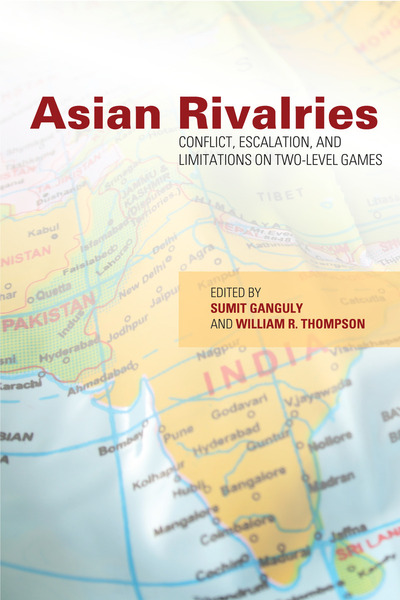 The most typical treatment of international relations is to conceive it as a battle between two antagonistic states volleying back and forth. In reality, interstate relations are often at least two-level games in which decision-makers operate not only in an international environment but also in a competitive domestic context.

Given that interstate rivalries are responsible for a disproportionate share of discord in world politics, this book sets out to explain just how these two-level rivalries really work.

By reference to specific cases, specialists on Asian rivalries examine three related questions: what is the mix of internal (domestic politics) and external (interstate politics) stimuli in the dynamics of their rivalries; in what types of circumstances do domestic politics become the predominant influence on rivalry dynamics; when domestic politics become predominant, is their effect more likely to lead to the escalation or de-escalation of rivalry hostility? By pulling together the threads laid out by each contributor, the editors create a 'grounded theory' for interstate rivalries that breaks new ground in international relations theory.

"A valuable comparative perspective is provided through the common themes pursued in the main chapters . . . The book is a significant contribution to understanding and debate on international relations not only in South and East Asia, but more widely elsewhere."

"This theoretically sophisticated, nuanced volume focuses on "interstate rivalries" – or the relationships between two states in which the antagonistic decision-makers perceive each other as competitors and see their adversaries as threatening enemies. The rich insights illuminate new and creative ways to look at interstate rivalries. This excellent volume is most timely and should be required reading for policy makers, diplomats, and scholars of international relations theory. . . Highly recommended."

"By focusing on enduring rivalries and two-level games, Asian Rivalries provides a much needed theoretical impetus to the study of contentious dyads."

"This book provides many important details, and therefore a number of good insights, about key rivalries in the Asian region. Beyond quantitative scholars of rivalry and conflict, the book should also appeal to more traditional security studies scholars, especially those with a focus on the Asian region. There are a number of books and articles written on single rivalries in Asia (indeed, several by the authors in this collection). Yet there are new insights gained here from looking at domestic politics, and the other contribution is the comparative perspective provided by integrating the different chapters." 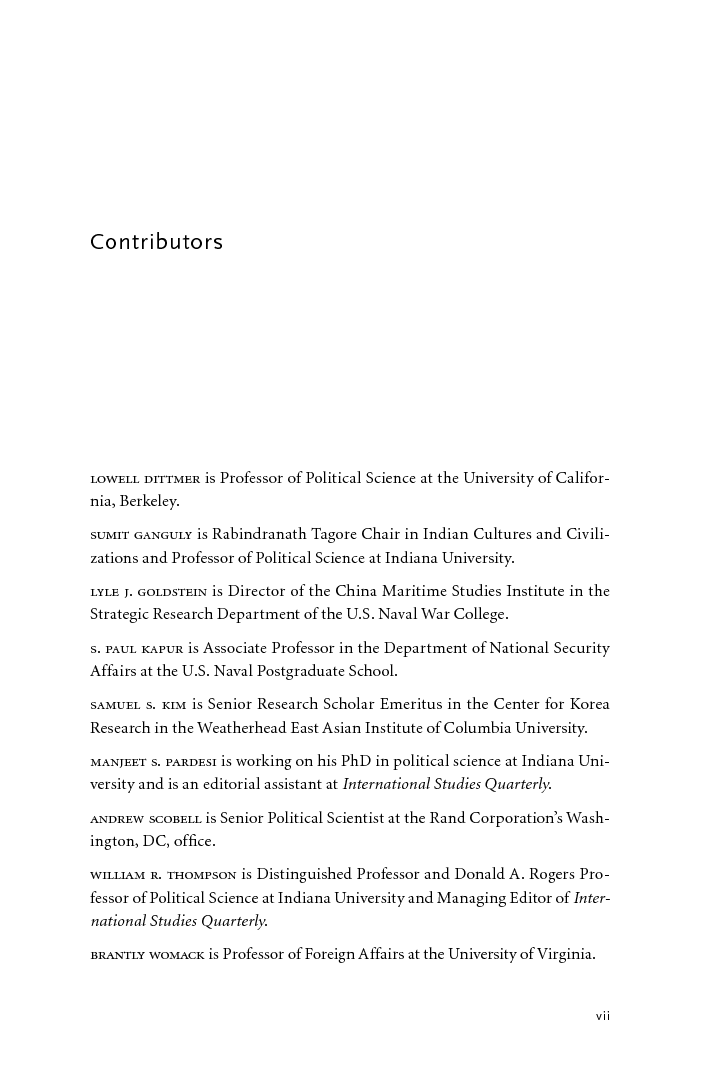 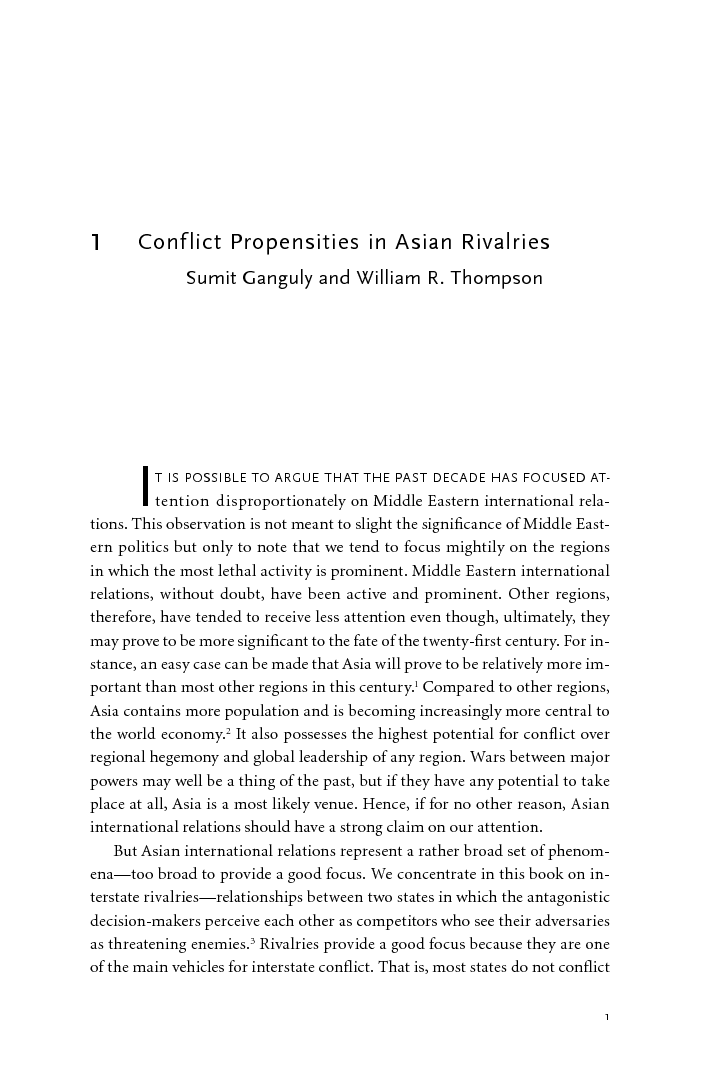 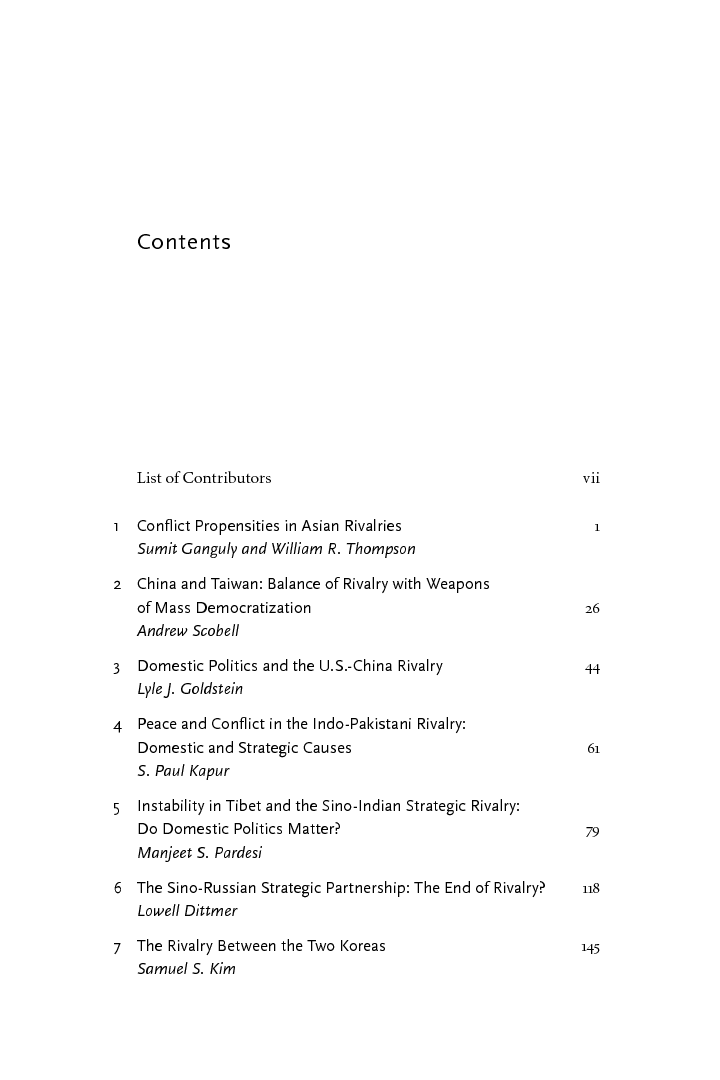