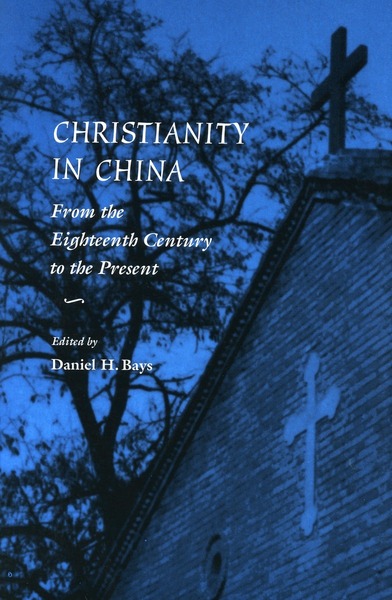 Christianity in China
From the Eighteenth Century to the Present
Edited by Daniel H. Bays

This pathbreaking volume will force a reassessment of many common assumptions about the relationship between Christianity and modern China. The overall thrust of the twenty essays is that despite the conflicts and tension that often have characterized relations between Christianity and China, in fact Christianity has been, for the past two centuries or more, putting down roots within Chinese society, and it is still in the process of doing so. Thus Christianity is here interpreted not just as a Western religion that imposed itself on China, but one that was becoming a Chinese religion, as Buddhism did centuries ago.

Eschewing the usual focus on foreign missionaries, as is customary, this research effort is China-centered, drawing on Chinese sources, including government and organizational documents, private papers, and interviews. The essays are organized into four major sections: Christianity’s role in Qing society, including local conflicts (6 essays); ethnicity (3 essays); women (5 essays); and indigenization of the Christian effort (6 essays). The editor has provided sectional introductions to highlight the major themes in each section, as well as a general Introduction.

Daniel H. Bays is Professor of History at the University of Kansas.

"This work is unique in that it subjects the history of Christianity in China to rigorous historical investigation. No other work on the subject can compare even remotely with it in depth and breadth of documentation and in analysis. The papers all reflect original research in sources seldom or never used before, and they are as much concerned with social history as with religious history. The volume is a benchmark work on Christian life in China in the context of a changing indigenous society."

"Unique in that it subjects the history of Christianity in China to rigorous historical investigation. . . . A benchmark work."

"Together the essays offer a rich view of one of China's smallest minorities: Christians. . . . The book is highly recommended for all those interested in modern China, international relations, women's issues, religion in China, and cross-cultural studies."

"One can only praise the considerable stengths of this collection: its breadth, freshness, and collaboration that make it a first-rate work in its field. . . . This will be a standard reference for anyone interested in understanding the remakable development of Christianity in China."

"This book prepares the way for a new stage of scholarship about the interaction between Chinese and foreign ideas and institutions."

"These twenty superb studies . . . are all meticulously reserched and lucidly written pieces, a rare feat for a collective work, and a credit to Bays."