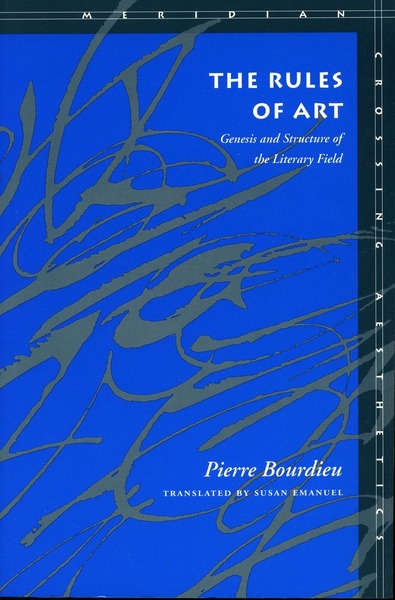 Written with verve and intensity (and a good bit of wordplay), this is the long-awaited study of Flaubert and the modern literary field that constitutes the definitive work on the sociology of art by one of the world’s leading social theorists. Drawing upon the history of literature and art from the mid-nineteenth century to the present, Bourdieu develops an original theory of art conceived as an autonomous value. He argues powerfully against those who refuse to acknowledge the interconnection between art and the structures of social relations within which it is produced and received. As Bourdieu shows, art’s new autonomy is one such structure, which complicates but does not eliminate the interconnection.

The literary universe as we know it today took shape in the nineteenth century as a space set apart from the approved academies of the state. No one could any longer dictate what ought to be written or decree the canons of good taste. Recognition and consecration were produced in and through the struggle in which writers, critics, and publishers confronted one another.

Pierre Bourdieu is Professor of Sociology at the Collège de France. Stanford University Press has published eight other books by Bourdieu, most recently Free Exchange, with Hans Haacke (Stanford, 1995).

"A major, pathbreaking work, The Rules of Art will stimulate theoretical debates for years to come."

"The Rules of Art is consistently interesting, sometimes enthrallingly so. It is written with a clarity not commonly encountered in French writers on art, and with an irascible authority to which Bourdieu's acuity and learning certainly entitle him."