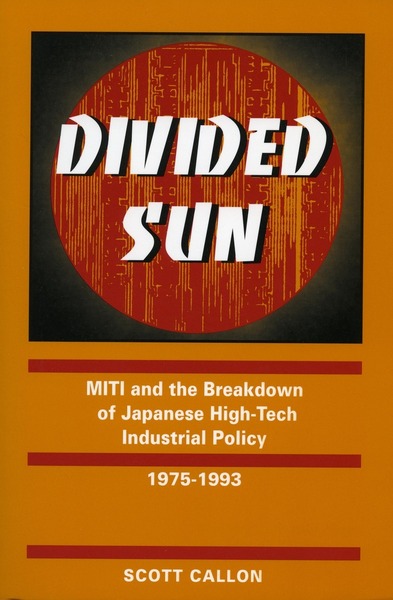 Winner of the 1996 Hiromi Arisawa Awards, sponsored by the AAUP.

Divided Sun is the story of the methods and machinations that have driven Japan's high-tech industrial policies over the last two turbulent decades. It focuses on MITI and Japan's giant electronics firms - their ambitions and conflicts - in the context of the core of MITI's high-tech strategy since the 1970's, the so-called "cooperative" technology consortia. The author finds that despite widespread claims to the contrary, MITI's industrial policy in high technology has proved to be neither cooperative nor successful. He shows that the policymaking process is torn by conflict and competition: between MITI and other bureaucracies, between MITI and powerful Japanese companies, and between the different companies. As a result, the elaborate structures created to promote cooperation are in many cases a public show masking the underlying reality of fierce competition and conflict.

Equally important is the fact that recent technologies emerging from Japanese high-tech consortia have been sadly disappointing. The author's detailed explanation of MITI's internal decisionmaking processes reveals that much of MITI's decline in effectiveness is caused by its rigid insistence on targeting technologies in accordance with long-term plans even when the technologies are soon rendered obsolete in the rapidly changing high-tech marketplace. In the shadow of these new realities, MITI finds itself at a turning point. The author argues that it will have to redefine itself and carve out a new role in the Japanese political economy and the bureaucracy. MITI's primary focus cannot be what once worked so successfully, i.e., the promotion of Japanese companies in international competition. If it does not find a new role, and soon, MITI faces a slow but inevitable decline in influence and effectiveness.

"Callon has done his research with exemplary thoroughness. . . . He draws extensively on Japanese-language documents, newspapers, and government papers. But what makes Callon's evaluation particularly worthwhile is that it is also based on interviews with some 100 Japanese researchers, managers, and bureaucrats. . . . From this wealth of inside information, Callon concludes that it is companies, not government bureaucracies that have been at the heart of Japan's stunning postwar ascent."

"Callon's findings are extraordinary. . . . It is essential for anyone trying to get a little closer to the core of what makes Japan tick."

"Both Japanese and Western readers can learn much from this gold mine of detailed information that sheds light on the workings of Japan's high-tech consortia."