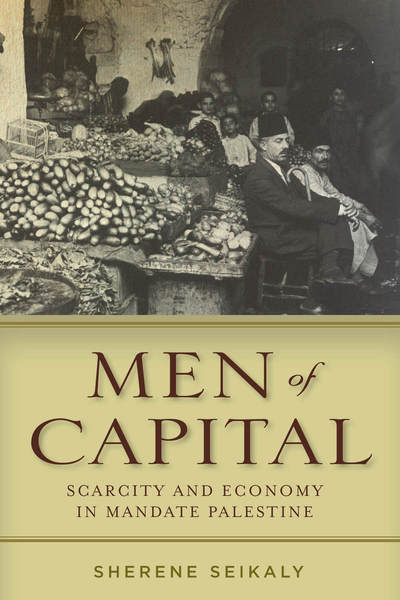 Shortlisted in the 2016 Palestine Book Awards, sponsored by the Middle East Monitor (MEMO).

Men of Capital examines British-ruled Palestine in the 1930s and 1940s through a focus on economy. In a departure from the expected histories of Palestine, this book illuminates dynamic class constructions that aimed to shape a pan-Arab utopia in terms of free trade, profit accumulation, and private property. And in so doing, it positions Palestine and Palestinians in the larger world of Arab thought and social life, moving attention away from the limiting debates of Zionist–Palestinian conflict.

Reading Palestinian business periodicals, records, and correspondence, Sherene Seikaly reveals how capital accumulation was central to the conception of the ideal "social man." Here we meet a diverse set of characters—the man of capital, the frugal wife, the law-abiding Bedouin, the unemployed youth, and the abundant farmer—in new spaces like the black market, cafes and cinemas, and the idyllic Arab home. Seikaly also traces how British colonial institutions and policies regulated wartime austerity regimes, mapping the shortages of basic goods—such as the vegetable crisis of 1940—to the broader material disparities among Palestinians and European Jews. Ultimately, she shows that the economic is as central to social management as the political, and that an exclusive focus on national claims and conflicts hides the more complex changes of social life in Palestine.

Sherene Seikaly is Associate Professor of History at the University of California, Santa Barbara.

"Men of Capital is a remarkable achievement. Sherene Seikaly introduces us to the class of Palestinian capitalists, a group too often overlooked in histories of Palestine and Israel, and brilliantly puts them into the context of their time, exploring their group consciousness, hopes, and aspirations. Examining their failures to break through the iron ceiling of Britain's colonial commitment to the Zionist project, Seikaly offers a powerful critique of the strait-jacket of settler colonialism."

Sherene Seikaly's Men of Capital redraws the class map of British Mandate Palestine and expands ongoing efforts to rethink the Nahda. This work clearly demonstrates how the schemes used to rationalize governance under the pressures of revolt and war ultimately betray the incoherence, ineffectiveness, and racism of British rule."

"Men of Capital is a breathtaking study of the complex work of making 'economy' in pre-1948 Palestine, filled with unforgettable characters striving for economic renewal in commerce and in the home. Sherene Seikaly reveals a Palestine being remade, bit by bit, into distinctly 'Jewish' versus 'Arab' worlds, and gives us entirely new ways of thinking about Israel/Palestine and colonialism—all wrapped up in an unstoppable read."

"Sherene Seikaly's critical history of Palestinian economic agents and thinkers is an exemplary instance of new approaches to political economy. Eschewing both nostalgic mourning and nationalist frames, Men of Capital will inform and instruct debates about the regional roots of economic practices and the institutional infrastructure of economic imaginaries across twentieth century Middle Eastern studies."

"[T]his book is an interesting contribution to the growing literature on Palestine and the Palestinian Arabs under the Mandate, especially in highlighting the entrepreneur class of "Men of Capital" and socio-cultural aspects of the growing bourgeoisie, and should be read as such by its students."